Outside of Roseland in April (more by Robert Altamn) 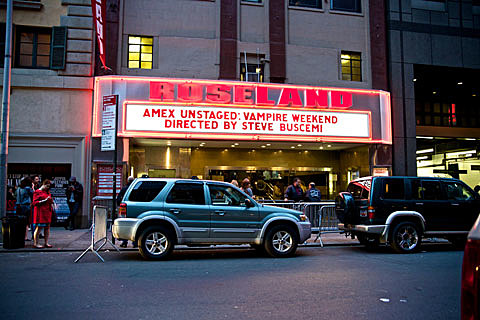 Whether you actually liked seeing shows there or not, Roseland is one of NYC's classic venues. So sad news from Billboard:

New York City's famed Roseland Ballroom will close its doors in April, according to an internal e-mail obtained by Billboard, though no official announcement has been made.

The venerable venue, owned by developer Larry Ginsberg and booked by Live Nation, opened at its 52nd street location, a converted skating rink, in 1958 and is a sentimental favorite for many bands. The history of the venue in New York dates back to 1919, when it was located at 51st and Broadway, and prior to that in Philadelphia.

Evolving from ballroom dancing in the '20s to popular music, Roseland has for years been a favored New York play for a wide range of bands from the early days of rock, through disco, grunge, modern rock, jam, pop, urban and EDM. The venue found a new gear with a $1 million production/rigging renovation in the early '90s, funded by Ginsberg, which led to more high profile bookings of multiple dates on bands like Red Hot Chili Peppers, Nirvana, and other hot acts when competition in that cap range was not as fierce. - [Billboard]