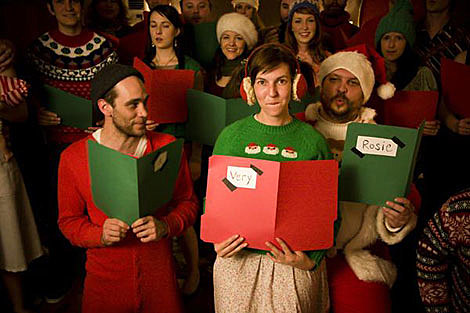 Earlier this year, Seattle songwriter Rosie Thomas, who has collaborated with friends Damien Jurado, David Bazan and Sufjan Stevens in the past, again rounded up family and friends to put together A Very Rosie Christmas, a holiday-themed album that mixes traditional songs and covers (Peanuts' classic "Christmastime Is Here" for one) with originals like "Why Can't It Be Christmastime All Year" - a rolling indie-pop singalong truely worthy of release on Thomas' own Sing-a-long Records label. Check out the song in the video below.

Rosie's pair of NYC shows - tonight, December 2nd, at the Living Room (TICKETS) and tomorrow, December 3rd, at the Bell House in Brooklyn (TICKETS) - should be a welcome respite from long evenings locked on WCBS-FM's all-holiday programming. All tour dates below.

Thomas writes that the full band accompanying her includes "my brother Brian Thomas, Josh Myers, Andrew Rudd and my fella Jeffrey Shoop! My friend Sheila Saputo will be coming along too, opening the shows every night for us with her gift of Christmas cheer!" Read Rosie's favorite Christmas memories on her blog.. 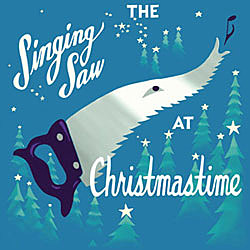 Another upcoming holiday-music event, The Music Tapes Caroling Tour, has a NYC visit scheduled for December 13th and 14th. Details are scarce but reports from the tour's earlier dates indicate that interested parties who emailed or wrote The Music Tapes in advance should be getting an email the day of with details as to a location. Someone, expect a knock from Juliian Koster between 6pm and 9pm, caroling hours...

Merge recently released Julian Koster's The Singing Saw at Christmastime (click for a preview). MP3 above. Video below...

Canadian major label singer/songwriter and multi-instrumentalist Hawksley Workman is a pretty big deal up North (and in Europe); yet in the States, both his 2008 releases - Between the Beautifuls and Los Manlicious - are import-only...as is Hawksley's amazing 2001 album of Christmas originals called Almost a Full Moon, which features eight (re-released in 2002 with ten) quirky-but-not-cloying cabaret-esque Christmas/winter odes. It's been a annual favorite of mine since finding it a few years ago. Last Friday, Workman and band opened a show at Toronto's Massey Hall with the album's title track. This Friday, December 5th, he plays Joe's Pub as part of the venue's 10th anniversary celebration. Tickets are currently still available. All tour dates and a video below...

Rosie Thomas - Why Can't It Be Christmastime All Year