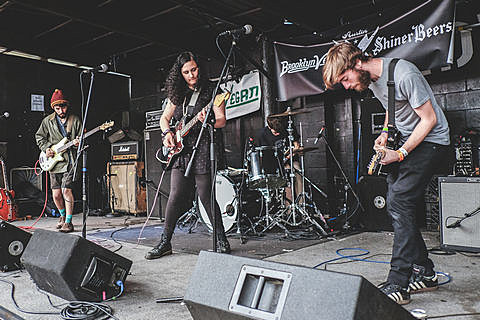 Record Store Day 2014 is just a couple weekends away (Saturday, April 19) and even if you aren't one of the ones clamoring for RSD exclusive releases, you can partake in teh festivities via free in-store performances. Rough Trade NYC has announced it's slate of RSD live music performers: Amen Dunes, Betty Who, Fear of Men, Mark Mulcahy, Milagres, Nothing, Palehound, and The Rails. Additionally, the day will feature DJ sets by Bella Union's Simon Raymonde, the folks at Daptone Records, Justin Strauss, and Deano Sounds of Cultures of Soul Records. Set times have not been announced but the performances are free to attend.

The Rails, which features Kami Thompson (Richard & Linda Thompson's daughter), plays London's Rough Trade East in the morning and flies to NYC immediately after for her show at the Williamsburg location (shades of Phil Collins at Live Aid there).

Fear of Men play another free show in NYC the night before (4/18) at Brooklyn Night Bazaar, with Beverly, Alvvays and Beach Day.

If you are one of those looking for RSD14 exclusive releases, Rough Trade has published their list of what they're getting in the store. On Record Store Day, Rough Trade NYC opens at 9 AM.