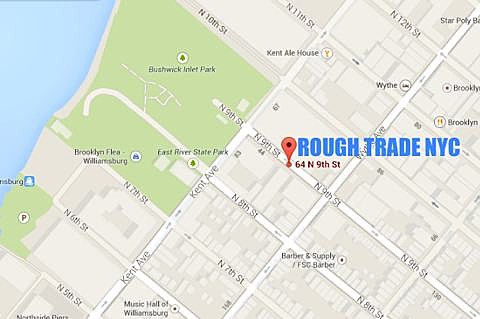 Coming about a year later than expected, record store Rough Trade NYC is finally set to open in Williamsburg on November 25, reports Billboard. That's the Monday before Thanksgiving, opening just in time for the crucial Black Friday and holiday shopping. The space is a "15,000 square foot repurposed film prop warehouse" at 64 N. 9th St. which is between Wythe and Kent, the first for the UK retailers, and will also be a music venue booked by Bowery Presents. More from the Billboard article:

"New York and London are similar in many ways -- they're kaleidoscopic celebrations of global differences and similarities," Rough Trade co-president Stephen Godfroy tells Billboard of expanding across the Atlantic. "They enjoy an open-mindedness, a deep respect for the past, a voracious appetite for the future, which all combines to produce a climate that suits our individual approach to music retail."

The Williamsburg store was originally announced in April of 2012, with plans to open its doors at an unspecified date later that year. But what Godfroy describes as "numerous obstacles in the construction planning and building process" left those plans in limbo until now.

Rough Trade N.Y.C. will sell all new music -- no used -- in multiple formats in addition to serving as a "healthy-sized place to hang out" for music lovers. A portion of the space has been sectioned off as a performance venue for free in-stores as well as after-hours ticketed concerts booked by The Bowery Presents.

In other Brooklyn record store news, Captured Tracks' new retail space is now open at 195 Calyer in Greenpoint. Academy Records will close its N. 6th space by the end of the month and be moving to Greenpoint too.

You can watch an animated announce video for the Rough Trade NYC store below.