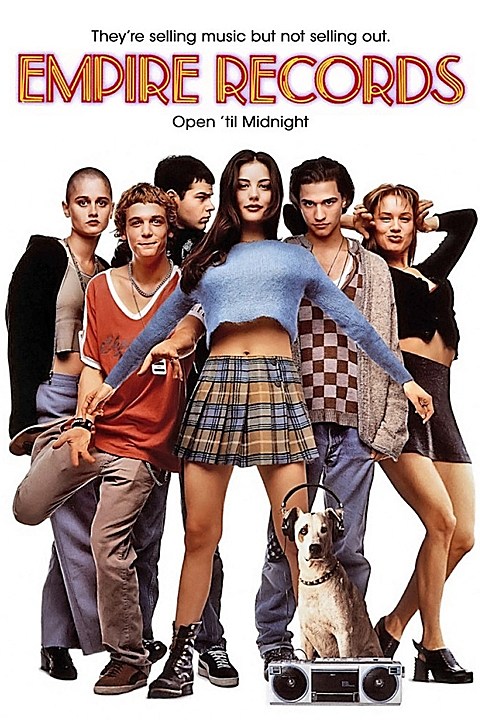 You may remember that last year for Record Store Day, Father/Daughter Records put out Faux Real, a compilation of punk and indie bands covering fictional TV and movie bands. RSD rejected the idea of putting out a sequel, but Father/Daughter are going ahead with it anyway and will release Faux Real II on April 28. It features Chumped, Krill, Allison Crutchfield, LVL UP and more taking on songs from Scott Pilgrim Vs. The World, Billy Madison, Doug, Almost Famous and more. Listen to LVL UP's take on "Somebody Kll Me Please" from The Wedding Singer, with the full tracklist, below.

There's also a release show happening in NYC on April 28 at Palisades with Bellows, Small Wonder, Rivergazer and Sharpless. Tickets are on sale now.

In other music movie news, Empire Records turns 20 this year, and Rough Trade NYC in Williamsburg will be hosting a high-concept anniversary celebration on April 8. Presented by BBQ Films, they're even calling it Rex Manning Day and will have the whole place turned into the actual Empire Records store from the movie. Here's the event description:

Twenty years - to the day! - since the original Rex Manning Day, BBQ Films invites you to "Say No More, Mon Amour," damn the man, and save The Empire. For one night only, Williamsburg's Rough Trade is transformed into the legendary Empire Records, with all the staff and characters you've come to love (and hate).

On April 8, 2015, join Lucas and his couch cushion, boss Joe (but don't touch his drums!), Gina and her "Sugar High," and, of course, Corey and her crush, Rex Manning... Immerse yourself in the world of Empire Records with a screening of the film, live music, a Rex Manning autograph, and, if you're brave enough, a chance to shave your head for Debra's funeral. Music-veto power available, pending Mark's approval.

Limited edition! For brave souls, special secret experiences will be auctioned off the night of. Think: A Warren shopping spree. A Gina Sugar High. An Oh Rexy You're So Sexy one-on-one with Rex himself... Come with a few extra bucks if you're game!

Tickets are on Internet presale now (anyone know the password?) and the general on-sale begins Friday, 2/20, at noon. A portion of proceeds will go to a TBA charity.

Empire Records is filled with memorable music moments, like when Eddie eats a special brownie and watches a GWAR video (only to hallucinate that GWAR attacks him on stage), when Joe gets behind the kit for AC/DC's "If You Want Blood (You Got It)," when most of the cast dances on the rooftop to The The's "This Is The Day," and of course when Gina joins Berko (played by actual rock musician Coyote Shivers) to sing "Sugarhigh." (By the way, if Faux Real III happens, someone should really do "Sugarhigh.") And for the real nerds, the post-credits scene when Eddie and Mark argue over whether Primus or the Pixies have better bass lines.

Revisit some of those moments below...

LVL UP - "Somebody Kill Me Please" (The Wedding Singer cover)