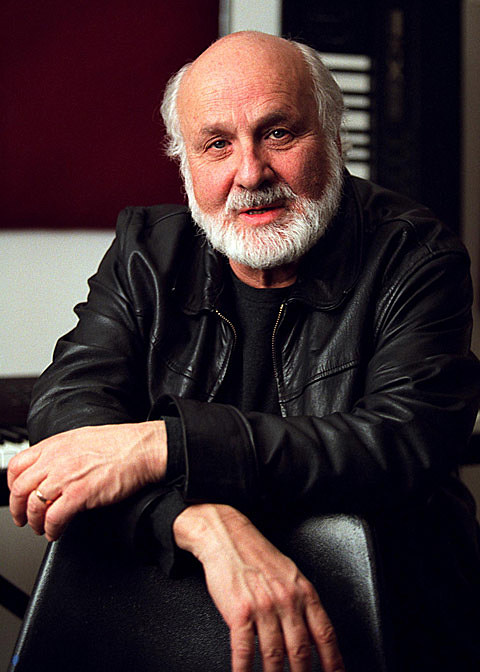 Morton Subotnick (born April 14, 1933 in Los Angeles, California) is an American composer of electronic music, best known for his Silver Apples of the Moon, the first electronic work commissioned by a record company, Nonesuch...

Early electronic music was made using wave generators and tape-manipulated sounds. Subotnick was among the first composers to work with electronic instrument designer Don Buchla. Buchla's modular voltage-controlled synthesizer, which he called the Electric Music Box and which was constructed partly based on suggestions by Subotnick and Sender, was both more flexible and easier to use, and its sequencing ability was integral to Subotnick's music.
At a time when electronic music was highly abstract, largely concerned with pitch and timbre, with rhythm an afterthought or of no consequence and patterns largely avoided, Subotnick broke with the academic avant-gardists by including sections with regular rhythms. Both Silver Apples and 1968's The Wild Bull (another Nonesuch-commissioned work for tape; they have since been combined on a Wergo CD) have been choreographed by dance companies around the world. -[Wikipedia]

Electronic music pioneer Morton Subotnick, who maybe you caught as part of the Unsound Fest earlier this year, will perform and discuss Silver Apples Of The Moon TONIGHT (9/15) at Greenwich House Music School (46 Barrow Street at Bedford) as part of a program entitled Morton Subotnick: 1963-1973. Tickets are still available at the door.

The show kicks off Season 26 of the North River Music Series, which includes an examination of Morton subotnick's latter works (the shockingly titled Morton Subotnick: 1973 to the Present) on May 3, 2012. Details on that event is forthcoming, but for now head below for more details on tonight, and the full list of planned events for the coming year.

In addition, Subotnick will also hit Roulette in Brooklyn on 9/22 (509 Atlantic Ave) as part of a duo with Tony Martin and sharing a bill with George Lewis & Wet Ink Ensemble. Tickets are on sale.

Roulette reopens with a series of special shows in Brooklyn TONIGHT (9/15) including one on 9/17 with Lou Reed who plays Hal Willner's thing at Highline Ballroom tonight.

Morton Subotnick recently played Neon Marshmallow in Chicago, a festival that will be underway in Brooklyn one month from today. The schedule was recently posted HERE.

Video of Subotnick in action as well as details on the North River Music series are below.

Morton Subotnick, a pioneer in the development of electronic music and an innovator in works involving instruments and other media, opens Greenwich House Music School's acclaimed North River Music series on September 15th with one of two discussions he will conduct for North River Music's 26th season. For the first, he will focus on his works from 1963-1973, including a short performance of his celebrated piece "Silver Apples of the Moon." Commissioned by Nonesuch Records in 1967, it was the first time an original large-scale composition had been created specifically for the disc medium - a conscious acknowledgment that the home stereo system constituted a present-day form of chamber music. With its creation was born a new music genre that anticipated the living room as a venue. Subotnick will be available to meet members of the public at a reception following the event.

Learn more about Morton Subotnick on his website here and click here for a video of Subotnick at work.

Founded by Frank Wigglesworth in 1985, GHMS's North River Music is one of NYC's first concert series devoted to new and experimental music and showcases works ranging from the classics of the 20th century avant-garde to new works by composers from a variety of music traditions. More info here.