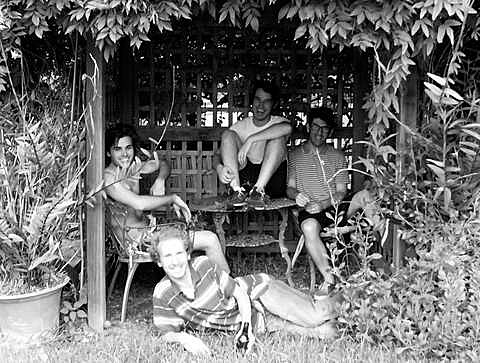 Australia's Royal Headache are in town bringing their blown-out power pop to Cake Shop tonight (6/13) with Home Blitz, Scott and Charlene's Wedding and Lame Drivers; and again at Warsaw on Thursday (6/14) as part of the Chaos in Tejas showcase at the Northside Festival that also includes Ceremony, Citizens Arrest, and Magrudergrind. No advance tickets for the Cake Shop show; Warsaw tickets are still available and you can try and get in with your Northside Badge.

Royal Headache released their self-titled debut last month on What's Your Rupture and is pretty killer stuff, a mix of '60s soul and garage and '70s power pop and punk. Frontman Shogun really belts it out, with pipes somewhere between Steve Marriott and Paul Weller and his stage presence is just as emotive. You can listen to the album below via a Spotify widget as well as watch the video for "Girls," and thre are two tracks to download above.

If you can't make tonight's show in person but are near a computer, you can stream the Cake Shop show live via East Village Radio. The dedicated stream goes live at 10PM EST but judging by doors and the four-band line-up, Royal Headache probably won't go on till around midnight. Details over at EVR.

Also playing the Cake shop show tonight are Scott & Charlene's Wedding whose singer Craig Dermody is originally from Melbourne but now lives in Brooklyn. You can check out his record which is streaming below, which was made with help from members of Family Portrait and The Twerps who share a similar sound. Scott & Charlene's Wedding are also playing Shea Stadium on July 12 with Island Twins, Pale Lights and Alex Bleeker & The Freaks.

Album streams and a list of Royal Headache tour dates are below.