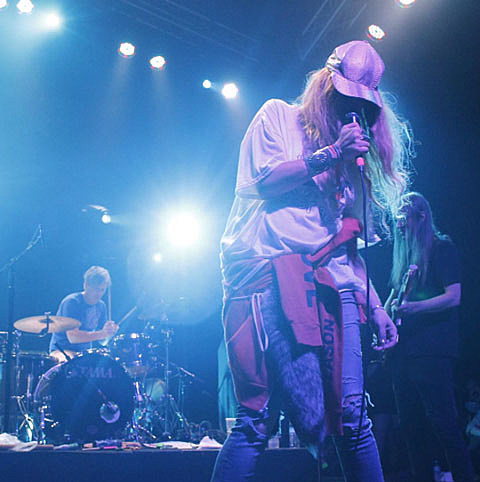 Of course efficiency and taught musicianship was never a Royal Trux live show hallmark. Still, loose songs became even looser to the point of falling apart. Red Tiger and Mercury were beautiful disasters. Bad Blood seemed to carry a deeper, more relevant meaning this time around, even though it was written back in the '80's. Toward the middle of the set Hagerty took over primary vocal duties, running through Deafer Than Blind and Let's Get Lost. Herrema asked the lights to be lowered and as the stage turned azul, the band went into Blue Is The Frequency. Hagerty and Herrema finally started to gel on Morphic Resident, then a great version of one of the band's most sentimental songs, Back To School, provided a true highlight to the evening, only to fall back to pieces with especially unfocused versions of Junkie Nurse and Banana Question.

You can watch a couple videos from Royal Trux's Berserktown II performance, below.

For those hoping Royal Trux might do an East Coast show, you get your wish: December 19 at Webster Hall. Tickets for that show go on sale Friday at 10 AM. It's their only announced show at the moment.