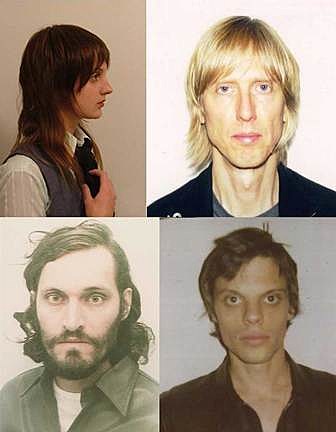 You can buy tickets for the Rriiccee show at the Green Room on December 7th. Rriiccee's four members (pictured above) are Vincent Gallo, Rebecca Casabian, Nikolas Haas, and Eric Erlandson from Hole.

Speaking of Hole, have you been keeping with Courtney Love's blog? If not, you're missing out on stuff like,

its not dexactly cake to get tebh fbi to help u despite heaps and masses of documents they had the nerve to leave behind the ftc helping you is bogus too, they dont do JACK whats your best suggestion for clearing up old id theft but MASSIVE old id theft open corps you knew nothing about bogus tax stuff...[Courtney]

Look what's out now on DVD: 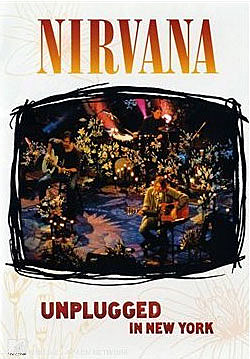 Mixed in surround sound by legendary surround mixing engineer Elliot Scheiner, this DVD allows fans to experience this performance like never before, completely unedited including the two songs not originally broadcasted ("Something In The Way" and "Oh Me" ), and with the best sound ever available (to anyone not in the studio for the original taping.) For the purists, also included on this DVD is the original 44 min broadcast version of the show, plus never-before-seen REHEARSAL performances. As an extra bonus to the DVD, a 14-minute interview segment called Bare Witness produced by MTV focuses on the recollections of those who experienced this magical moment in music history, those who produced it and interviews with the band from the day of the taping.

It seems to be selling well for a music DVD, but still not nearly as popular as Planet Earth.

Kurt Cobain was funny. Foo Fighters are playing some shows.