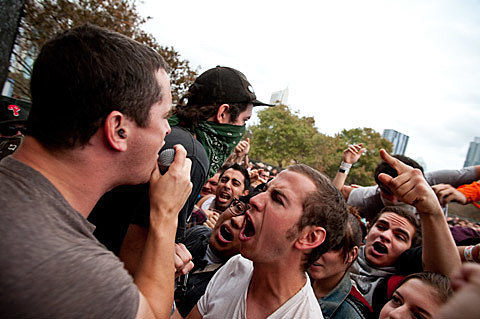 RSVP for the free Kid Dynamite, Joyce Manor, Red Hare, and Swearin' show at House of Vans (8/15) opens today at 9 AM. Like all House of Vans shows, RSVP is required but entry is still first come, first served.

This one of the last two US shows for Kid Dynamite before their reunion comes to an end. (The other is Philly's This is Hardcore Festival.)

To see Joyce Manor play a smaller venue (and presumably a longer set), you can catch them headlining their own Brooklyn show two days later at Knitting Factory (8/17) with Glocca Morra and Dogs On Acid (ex-Algernon Cadwallader). Tickets for that show are still available.

Meanwhile, House of Vans shows continue this Wednesday (7/31) with Melvins, Baroness, and Honky. That one's all RSVPed out, but you can also catch Baroness when their tour returns to NYC on August 14 at Irving Plaza with Royal Thunder (tix).