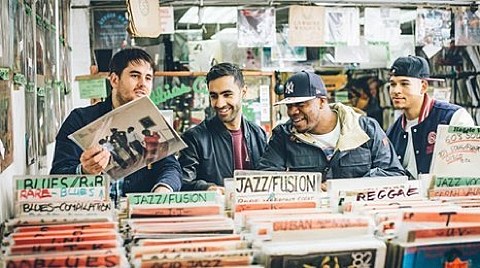 UK dance quartet Rudimental aren't too far removed from fellow Brits Disclosure -- in fact, both groups have collaborated with singer Sinead Harnett (also, just listen to "Baby") -- though while Disclosure almost perfectly blend mainstream and underground dance music, Rudimental do tend to lean more on the pop side. Some of the production veers towards American EDM, and while they've got choice vocalists like Sinead Harnett, and even more interestingly, Angel Haze, they've also got a track with Internet Explorer commercial soundtracking dude Alex Clare.

That said, similarly to a group like Bear Mountain, Rudimental use their mainstream appeal well, and I'd rather see this tearing up the charts than some of the other EDM-inspired pop you see on there. Plus, while Rudimental do have elements of the current house craze, they also set themselves apart by throwing '90s-style drum n bass breakbeats into about half their songs.

Rudimental put out their debut album, Home, in the UK earlier this year, and it will finally be getting a US release next week (8/6) via Big Beat Records. You can listen to the entire album (and read a track-by-track interview) over at SPIN, and stream six of its twelve tracks below.

Rudimental are on tour this year, and they'll be heading to North America this August for some festival appearances at Outside Lands, Made In America, and Osheaga. They'll also be stopping in NYC to open for Emeli Sande (who sings on their album) at her Rumsey Playfield show (8/28) in Central Park. Tickets for that show are still available.

All Rudimental dates are listed, along with those song streams, below...