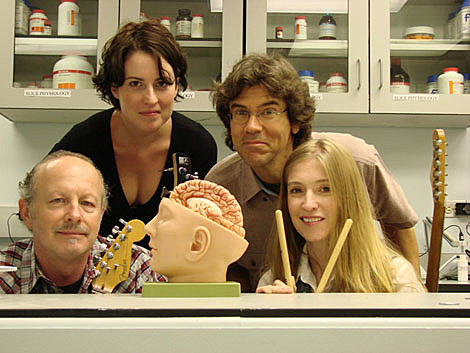 The Rock-It Science Festival will bring together eight outstanding--and noted--scientists and academics who share a second career as musicians, along with six additional performers with international exposure and a great appreciation for science.

Dr. Joseph LeDoux conceived the idea for this unique event, which serves as the closing event for the Sensation to Emotion Conference on March 2 and 3. LeDoux is a professor of neuroscience at New York University who not only has pioneered study of the brain's mechanisms for emotion and memory and is the author of The Emotional Brain and The Synaptic Self, but is also guitarist and lead vocalists of rock band The Amygdaloids, who will be performing at Rock-It Science. The Amygdaloids line-up also includes three other NYU scientists: neuroscientist Daniela Schiller, PhD candidate Nina Galbraith Curley, and Environmental Sciences professor and author Tyler Volk.

The Rock-It Science Festival will start rockin' at 6:30 p.m. on March 3 at the Highline Ballroom, 431 W. 16th Street in New York. Australian Go-Go dancer and variety show star Anna Copa Cabanna will emcee the event, promising an interesting and humorous evening. Rufus Wainwright will highlight an evening that will also include musician, writer and record producer Lenny Kaye, who is the long-time collaborator of poet-rocker Patti Smith.

Other guest artists at Rock-It Science include Grammy-nominated songwriter and international recording artist Gary Lucas, and Peter Holsapple, an acclaimed musician, songwriter and side man who is co-leader of the legendary dBs, and has performed extensively with R.E.M. and Hootie & The Blowfish. American folk-rock duo The Kennedys, jazz/cabaret performer Pamela Luss, acclaimed songwriter Steve Wynn (of the Dream Syndicate and the Miracle Three), and Stuart Chatwood, previously the bassist and keyboard player for platinum rock band The Tea Party, also make the Rock-It Science lineup.

Rufus Wainwright performed in NJ on Friday, and has another NYC show coming up on March 4th.

Dee Snider was Santa this past Christmas.

The Db's are playing the R.E.M. tribute at Carnegie Hall in March.

More info on the Rock-It Science Festival below...

Many of the featured artists, including The Amygdaloids, perform songs whose lyrics are based on the scientists' own research. The unique connection between science and rock music relates a new understanding of the human condition that reflects the increasing role of science in issues of the mind, body and social relations. "A lot of people have been talking about this thing called 'neuroculture'," says musician/producer Tim Sommer, who is co-producing the event with Dr. LeDoux. "I am not 100 percent sure what this means, but I take it to mean there's this wonderful sphere where music and art interface with not only the workings of the brain, but art can also be made and inspired by investigating how the brain itself works. I think this event is an extraordinary example of that."

Besides The Amygdaloids, scientist-musicians performing at Rock-It Science also include Daniel Levitin, a cognitive psychologist, neuroscientist, and author (This Is Your Brain On Music, The World In Six Songs) who has performed with Mel Torme, Blue Oyster Cult and David Byrne; David Sulzer (a.k.a. Dave Soldier) who has worked with David Byrne, John Cale and Kurt Vonnegut along with co-leading musical groups that include The Spinozas and the Kropotkins; and evolutionary geneticist Pardis Sabeti, who leads the Boston band Thousand Days. New York Times global environment reporter and author Andrew Revkin of the band Uncle Wade will also take the stage.

The Rock-It Science Festival is sponsored by The Sensation and Emotion Network, which is focused on funding research and creating awareness of Sensory Processing Disorders (SPD), a brain-based problem that affects approximately five percent of school age children in the U.S. One subtype of SPD is Sensory Over Responsivity (SOR). SOR kids respond to sensory information (i.e. sound and touch) as though it were extremely aversive. They feel continually bombarded by stimuli and the resultant physiologic over-arousal and emotional disfunction negatively impact the child's daily functioning. The Rock-It Science Festival will raise funds for the E.M.B. Brout Sensory Processing and Emotion Regulation Program at Duke University and the SPD Foundation.

More information about the Rock-It Science Festival and artists performing at the event, as well as ticket information and advance registration, can be found online at http://www.sensationandemotionnetwork.com/html/Rock-It_Science.html