"Rufus Wainwright and the City Opera singers/pianist that came with him put on a really lovely and charming show tonight. #FillsMyHeart" - Jennifer Jones 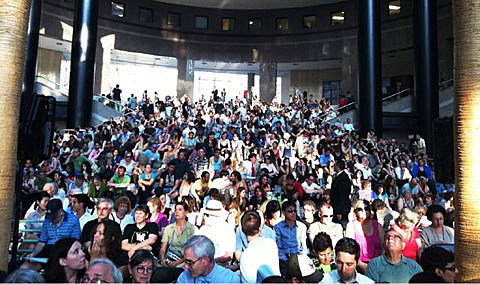 Rufus Wainwright packed the house (as pictured above) when he performed excerpts from his opera Prima Donna at World Financial Center on Tuesday (6/28). According to Dumbo Books of Brooklyn, the fantastic performance also featured:

Check out a video from the performance below.

Rufus also recently recorded a cover of Richard Thompson's "Down Where the Drunkards Roll" with his father Loudon Wainwright III. Check out a video of the recording session over at The Guardian.

Loudon will be at the Barnes & Noble in Union Square on July 7 performing music and reading from his essay "My Cool Life" which comes with his new 40 Odd Years boxed set. Priority seating is available with the purchase of the box set which Loudon will be signing copies of. The event starts at 5 PM.

The video of Rufus below...