Like Pure Noise Records, Run For Cover Records and some of their bands are selling merchandise to raise money for organizations that fight for racial justice.

You can enter the raffle as many times as you want for as many different test presses. Raffle winners will be chosen and contacted on Friday, June 5th. Purchase of one of the raffle entries on this page includes a free digital download of the release.

Citizen are donating 100% of proceeds from their webstore to The Legal Rights Center, "an organization that provides free criminal defense services to low-income families and particularly people of color."

Turnover have some new items in their webstore, and proceeds from all items (new and old) will benefit Black Visions Collective, Black Lives Matter, The National Police Accountability Project, Unicorn Riot, and Food Bank For New York City.

Will Yip, who has produced several RFC bands and whose label Memory Music is affiliated with RFC, is also raffling off several test pressings and a custom snare drum used on many of his recordings. The test pressings are by Tigers Jaw, Anthony Green, La Dispute, Daylight (Superheaven), Seer Believer, and Former Member. All proceeds will go to ActBlue's community bail funds fundraiser, which splits your donation between over 70 different local bail funds. Enter HERE. 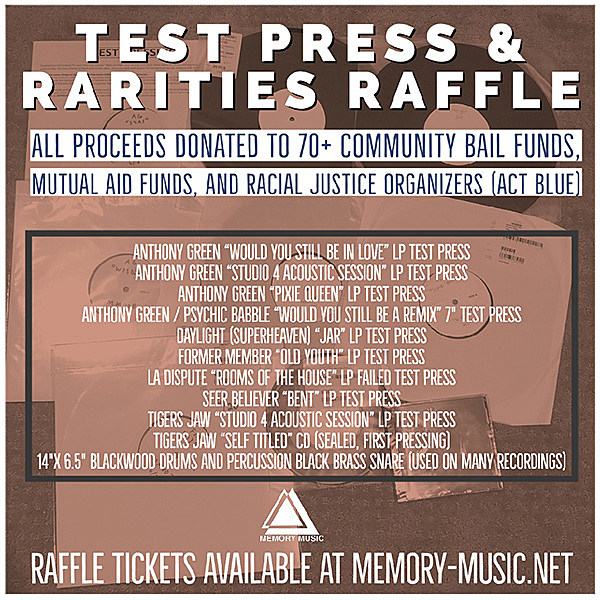 For other ways to help fight racism and police brutality, we put together a list of resources.