Run the Jewels at FFF Fest (via BV Austin Instagram) 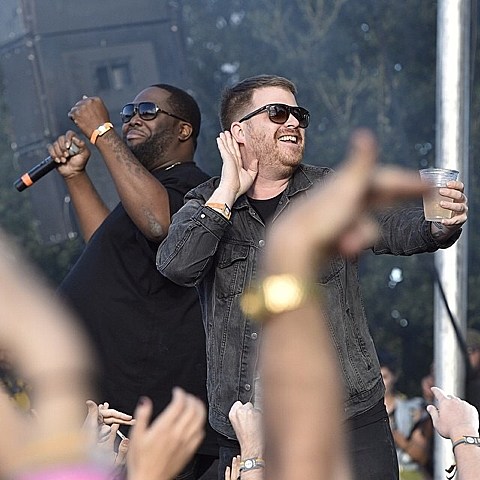 At Fun Fun Fun Fest on Friday (11/7), Run The Jewels were playing the Blue Stage simultaneous to Sun Kil Moon on the Black Stage, and during RTJ's set El-P took a minute to tell a story about how he loves Sun Kil Moon's song "The War On Drugs: Suck My Cock" ("I'm a rapper, we say shit like that") and that he introduced himself to Mark Kozelek before the show saying, "Hey, I'm a fan. We're the guys that are gonna be interrupting your set today with how loud our fucking crowd is." Then El continues, "And he said, 'what's your name' and I said 'Run the Jewels,' and I swear to god he said 'suck my dick Run the Jewels.' And I said "suck my dick Sun Kil Moon!'"

He then proceeded to ("with all due respect") get the crowd to chant "SUCK MY DICK SUN KIL MOON." Check out a video of that going down, below.

We didn't catch Sun Kil Moon's set, but according to The Austin Chronicle he said, "What's the name of that fucking band playing? Just kidding, whatever you're called, I love you guys."