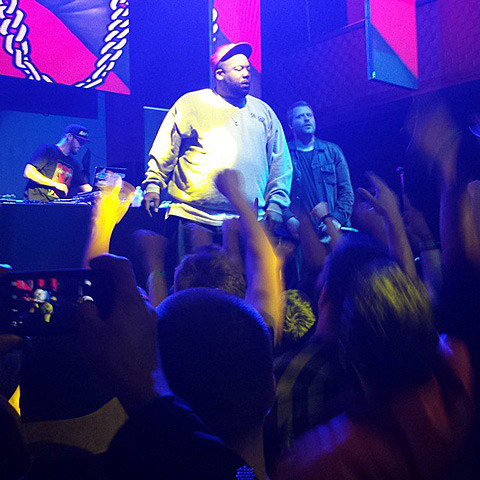 Beginning today, the U.S. Supreme Court will begin hearing Elonis v. U.S., a case regarding Anthony Elonis, a Pennslvania man convicted of making threatening statements about his estranged wife and law enforcement officials on social media. Elonis claims his writings were "theraputic" and helped him deal with his broken marriage. This case could have large ramifications on free speech and what is acceptable to post online. Elonis' defense argues that his writings are not any different than rap lyrics, and Eminem was cited as an example. In an op-ed piece today in USA Today co-authored with attorney Erik Neilson, Killer Mike is concerned about "the role of art and free speech in the justice system, as well as the commonly-held view that hip-hop culture is a threat to society." Here's a bit of it:

It is true that hip-hop has been scarred by violence. Tupac Shakur and the Notorious B.I.G., for example, two of rap's most important and influential artists, were killed in the prime of their careers. But for each instance of violence, there are countless examples of lives saved or made stronger. Trust us on this: The kids spending hours per day writing rap songs aren't a threat to society; they are often trying to escape the threats from society.

That story of hip-hop has been frustratingly difficult to tell, especially when the murder of Jordan Davis can be framed in the media as the "loud rap music" case or Michael Brown's association with rap music becomes part of a tragic story line that has far more to do with inequality, police brutality and racial discrimination. These problems are the "true threats" facing America today, not hip-hop. Let's hope the justices on the Supreme Court understand that, too.

Read the whole thing at USA Today. You may remember Killer Mike gave an impassioned speech last week at a St. Louis Run the Jewels show on the the night of the Ferguson decision.

Run the Jewels were in NYC this weekend for two shows at Stage 48.