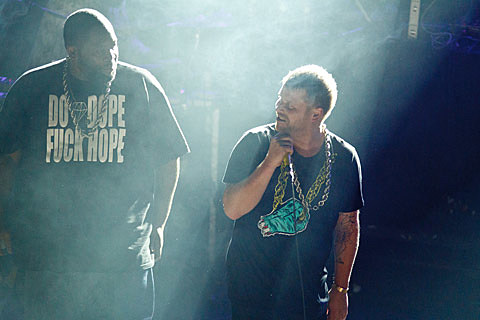 El-P and Killer Mike are each about to wrap up another great year, having both been active on their own and as their collaborative duo Run the Jewels. RTJ appeared in NYC a few times, including their big headlining Webster Hall show and a slot at Fool's Gold Day Off, but before 2013 comes to a close, they'll do another headlining gig in NYC at Music Hall of WIlliamsburg on December 13 with White Mandingos (ft. Murs and a member of Bad Brains) and Phony PPL. It's a Converse Rubber Tracks Live show which means it's free but do you need to get tickets, which go on "sale" Wednesday (12/4) at noon. Their only other US date scheduled for this year at the moment is New Year's Eve in Raleigh, NC.

In related news, Stereogum points to an instagram from El-P with a picture of a handwritten note of what you should not ask Run the Jewels in interviews. El-P specifies, "Do Not Ask: How we met, What we think about the state of hip hop, How we feel about other artists," then ends it with "Thank You + Good Luck!"

In more related news, El-P and Killer Mike are promising a second Run the Jewels album for 2014. In the meantime, check out their video for "Banana Clipper" (feat. Big Boi) from their self titled 2013 LP, below...