photo: Runaway Brother at Baby's All Right in January (more by Amanda Hafield) 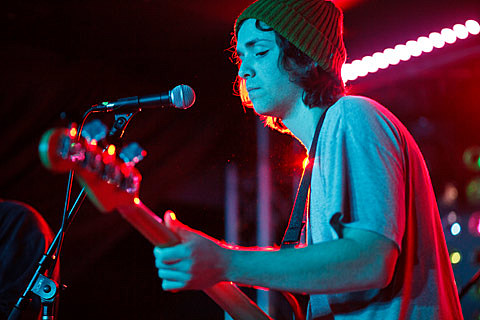 Cleveland's Runaway Brother have already put out a couple songs from their debut LP, Mother (due 3/31 via Tiny Engines) (pre-order), and we've now got the premiere of a third, "Catch." I've talked before about how Runaway Brother make pop punk that's more musically ambitious than the genre tends to be, and "Catch" is a perfect example of this. On one hand, this is the kind of youthful stuff that fans of Modern Baseball and The Front Bottoms are bound to love, but on the other, there's dynamic and rhythmic shifts, delicate textures, and a building instrumental passage not often heard in this genre. Check it out below

Runaway Brother have a few tour dates coming up too. Nothing in NYC, but they're nearby twice this week for a Long Island show at Soul Sounds tonight (3/3) and they play a Trenton, NJ show with Tiny Moving Parts at The Rathskeller on Friday (3/6).

All dates are listed, with all three singles from Mother, below...