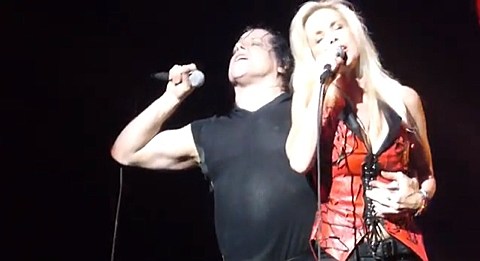 Former Runaways singer Cherie Currie has been talking for a few years now about releasing the followup to her only solo album, 1978's Beauty's Only Skin Deep (not including the 1980 collaboration with her sister Marie, Messin' with the Boys or the 1988 Young and Wild compilation), and though a release date still hasn't been announced, we are now one step closer. "Mr. X", the first single from the new album, which you've maybe heard on the radio, is making its online premiere in this post. Listen below.

Like her former bandmate Joan Jett's new album, "Mr. X" is pretty much exactly the kind of catchy hard rock you'd expect from a Runaways member, and to get that in 2013 is not a bad thing at all. And if Cherie's anthemic choruses aren't enough, the song's also got a rippin' guitar solo from Slash, plus his Guns N Roses/Velvet Revolver bandmates Duff McKagan (bass) and Matt Sorum (drums) are on it too. Matt also produced the record, which also features guest appearances from Billy Corgan and Juliette Lewis.

Cherie's tour hit LA back in August, where she teamed up with Danzig for one of the dates on his ongoing 25th anniversary tour (Doyle included). The show was one of the last-ever shows at the historic Gibson Ampitheatre, which closed its doors in September. (He also inadvertently played one of the final Roseland Ballroom shows earlier this month in NYC.) Being that it was the final Danzig show at the venue, he "wanted to add someone special," so he had Cherie come out to join him on a cover of the Lee Hazelwood/Nancy Sinatra duet "Some Velvet Morning." That cover was also recorded and may or may not appear on Danzig's upcoming covers album. Back in April, he told Loudwire:

My idea of covers is that you should never cover a song and do it exactly like the artist because everyone's always going to compare it to the way the original artists did it and they're just going to go "Oh I like the original better." I wanted to make it my own and take it in a different direction, maybe a different direction they didn't really think of at the time or would never think of because I have a much different background than they do.

There's a ton of other cool covers on there, I did a lot of covers people wouldn't think I would do like 'Biker' soundtrack theme song that I made crazy, there's a Lee Hazlewood/Nancy Sinatra cover on there and I had Cherie Currie come down and sing the Nancy Sinatra part.

She's really cool and has a great voice and it was just awesome and I wanted to keep that cool, older, '70s vibe because the Misfits came on the tail end of the '70s and I wanted to keep that vibe. The managers and lots of other people suggested the new alternative girls and I was like, "That's not what I want and here's who I'm thinking of" and they were like "What?" and it's fantastic, she did such a great job.

So stay tuned for more info on that. Meanwhile, watch a video of Danzig and Cherie doing "Some Velvet Morning" at the LA show and listen to the studio version, below.

In other news, Cherie Currie recently recorded a Christmas single with former Runaway Lita Ford (coming soon) and recorded a cover of T. Rex's "Life's A Gas" with Shameless (out now).

Updated tour dates are listed, along with the "Mr. X" stream and the Danzig video, below...