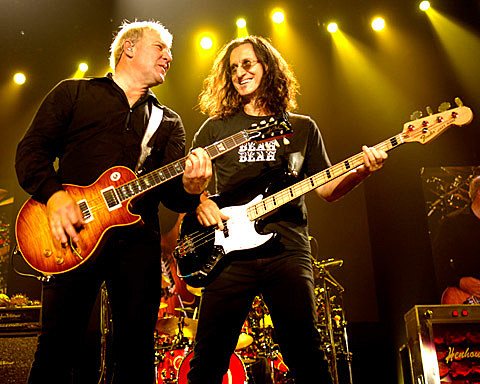 Rush will hit the road again for the 2011 leg of their "Time Machine Tour" where they'll perform their breakthrough LP Moving Pictures in its entirety. The tour hits Madison Square Garden on 4/10. Full ticket info is still forthcoming, but a fan pre-sale is currently ongoing. The tour's 2010 setlist is below with all dates.

Rush is currently working on their new LP Clockwork Angels for a 2011 release. The LP features "Caravan", which is available at iTunes now along with the "b-side" (is that term relevant in a digital age?) "BU2B".

If you are a fan of Rush, check out their recent documentary Beyond The Lighted Stage which chronicles the band from start to finish. The scene where Alex Lifeson tells his parents that he is quitting High School to become a guitarist is worth the price of admission alone. Pick up a copy.

All dates, the setlist and some videos below...