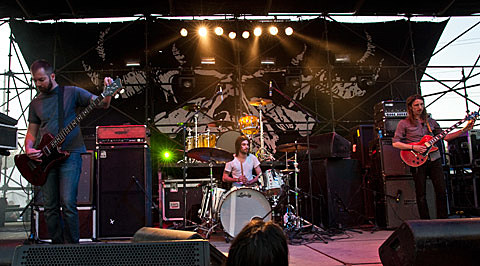 Post rockers Russian Circles released their most recent LP, Empros, on October 25 via Sargent House. Some of the album, especially the track "Miladek," which you can grab HERE, tends to cross over into the territory where post-rock meets emo and post-hardcore, similarly to The Appleseed Cast, though the sludgy guitars of their earlier albums still come through in full force. Though the majority of the album is instrumental, vocals do appear on the last track, "Praise Be Man." You can listen to the whole thing at Spotify.

Russian Circles are currently on a tour that just hit FFF Fest in Austin, and will come to the NYC-area for shows on November 15 at Bowery Ballroom and November 15 at Maxwell's with shoegazey San Francisco black metallers Deafheaven. The Men are also on both shows. Tickets are still on sale for the Bowery show and the Maxwell's show.