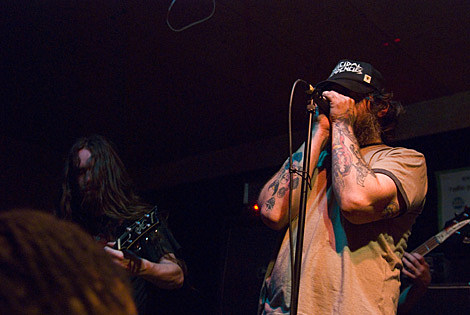 How do you improve on Shrinebuilder in the flesh? Rwake and Liturgy have been added as support at the upcoming Shrinebuilder show at Le Poisson Rouge on 11/15. Tickets are still available!

Shrinebuilder has also announced their participation in a particularly STACKED Roadburn 2010, along with the new Tom Warrior project Triptykon, the reunion of Goatsnake (!), Thor's Hammer, and acid-folkers Comus who will play their First Utterance LP in it's entirety(!). Oh, and did I mention Candlemass will be performing Epicus Doomicus Metallicus and the festival will also feature appearances from Yob, Moss, Altar Of Plagues, Mouth of The Architect, and many more. Must. Go.

Rwake are currently working on their follow-up to Voices of Omens, and are also scheduled to play Chicago with Shrinebuilder. Rwake has also been added to the Hellfest 2010 lineup which also includes Immortal, Atheist, Black Cobra, Bloodbath, Suffocation, Weedeater, with another 80+ bands TBA.

Wino of Shrinebuilder plays with his solo band at Irving Plaza tonight (10/9, tix here) and tomorrow (10/10, tix here) supporting Clutch, and will be back next week with Saint Vitus at Europa (10/16, tix here)!

Both CT (of Rwake) and Scott Kelly (of Shrinebuilder & Neurosis) host weekly podcasts on Combat Radio, and both are highly recommended.

Dale Crover of the Melvins (who plays drums in Shrinebuilder) recently played ATP and Nokia Theater with Down, and have a remix album out NOW entitled Chicken Switch. The LP features contributions from Merzbow, Lee Ronaldo, Matmos, and many others.

Full Shrinebuilder, Rwake and Liturgy dates, as well as a few live videos are below...