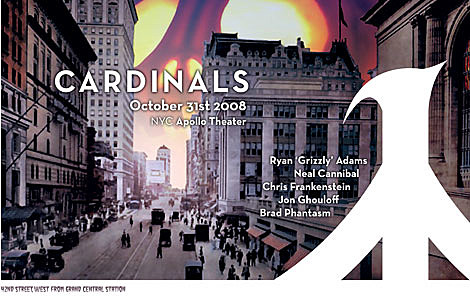 Is this like a tradition now? The Cardinals featuring a Ryan "Grizzly" Adams have scheduled a show at the Apollo on Halloween, thats the second year of Halloween shows for "Grizzly". Tickets go on sale Saturday, Oct 18th at 10AM (password = FIXIT). Post-Halloween, "The Griz" has a short UK tour mapped out before he hits the road with the Gallagher brothers (Oasis) including a show at MSG on Dec 17th. Tickets are still available.

Ryan Adams & The Cardinals are on the verge of dropping Cardinology, which hits store shelves/the interwebs on Oct 28th... you can preorder it here. The first single, "Fix It", is available for purchase now, but check out a snippet of it live below.

Grizzmiester R (OK, I'll be the the first to admit when something doesn't work) played Tulsa on Thursday Oct 16th. Peep the setlist below and peep all of his recent setlists, as well as why Danzig rocks his face off at his blog.

"Fix It" Live from Wilson Wolf on Vimeo.