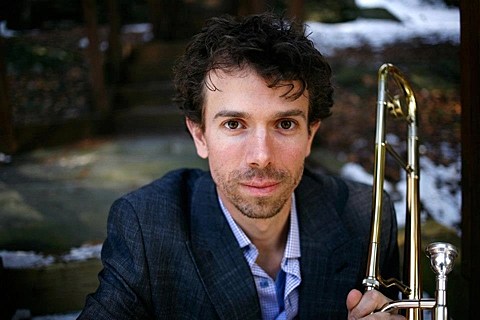 Trombonist Ryan Keberle has played as a member of Sufjan Stevens' Age of Adz band, St. Vincent & David Byrne's band, and appeared with Sufjan, Bryce Dessner and Nico Muhly at their Planetarium shows. He's also played with Escort, The Welcome Wagon, Nedelle Torrisi, Alicia Keys and more. He leads his own Brooklyn-based group, Catharsis, who will release their new album, Into The Zone, on September 30 which features collaborations with Chilean singer Camila Meza. His time playing with Sufjan Stevens (and being a longtime fan) inspired him to cover "Djohariah" last year, and now he takes on another Sufjan song, "Sister" (from Seven Swans) as a bonus track to Into The Zone. Here's what Ryan had to say about his Sufjan influence:

I, like so many others, spent the majority of my 20's listening to the music of Sufjan Stevens. Most good music connects with me on a deep emotional level, but there are those rare composers whose music moves me in ways that I've only otherwise experienced through sex, drugs, alcohol, good friendship and great comedy. My list of composers with this kind of musical emotional power is short and includes the likes of Lennon and McCartney, Maurice Ravel, Duke Ellington, and Maria Schneider, and after listening to Sufjan Stevens' music for the past 10 years now, I have officially added him to this list. In 2010, I had the great fortune to not only perform with Sufjan, but tour the world with him, performing the music from his last LP, "Age of Adz". Aside from being a true dream gig, this time spent on the road with Sufjan was filled with poignant lessons about music and life that I've drawn from thoroughly as I continue to delve deeper into the art of songwriting and band leading.

This track, "Sister", the second Sufjan Stevens "cover" recorded by my band, Catharsis, is a culmination of these lessons learned, both musical and personal. The music, although delivered in a jazz context, has much more to do with the universal and emotional power of all styles of music than it does with current jazz trends. Both Sufjan Stevens tracks we've covered, "Djohariah" and now, "Sister", are songs he wrote inspired by his sisters which I personally relate to having two sisters of my own.

The track premieres in this post and can be streamed below.

Ryan & Catharsis have shows coming up too, including a release show in NYC happening on October 7 at Jazz Standard (116 E 27th St). All dates are listed, with the new Sufjan cover, below...