RZA is The Man with The Iron Fists

Quentin Tarantino presents The Man With the Iron Fists, an action-adventure inspired by kung-fu classics as interpreted by his longtime collaborators RZA and Eli Roth. Making his debut as a big-screen director and leading man, RZA -- alongside a stellar international cast led by Russell Crowe and Lucy Liu -- tells the epic story of warriors, assassins and a lone outsider hero in nineteenth-century China who must unite to destroy the clan traitor who would destroy them all.

RZA's movie The Man with the Iron Fists opens on November 2 and features a soundtrack with contributions from The Black Keys, Kanye West, Raekwon, RZA, Wu-Tang Clan, Flatbush Zombies (who just played Afro-Punk), Freddie Gibbs, Ghostface Killah, Kool G Rap, and many, many more. Stream the new RZA track "Blowin' In The Wind" at soundcloud, and dig on the eye-popping "red band" trailer for the film, the movie poster and soundtrack tracklisting below.

The Man With the Iron Fists Red Band Trailer 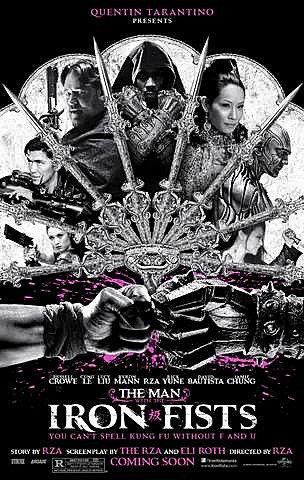