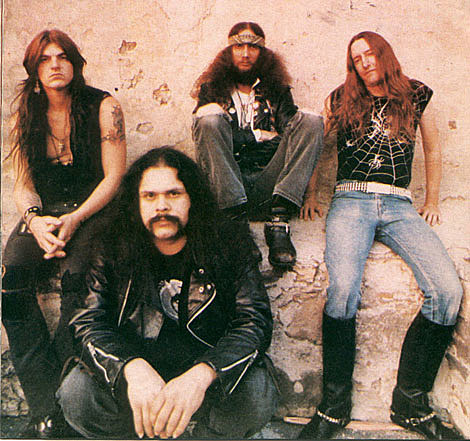 This is a gathering of like minded bands and fans from around the world, joined together by a love of music. This is a celebration of tube-driven distortion and crackling electric guitars, a raising of musical consciousness and brotherly and sisterly love, a communion with THEE MIGHTY RIFF, a time and place to get high en mass and bask in the heaviness.

Since 1999 we at Roadburn have emphasized the cutting edge, honored the forefathers, and worshipped the riff. The 2009 Festival is a perfect reflection of what we have always been about

Every year, Roadburn is a clusterfuck of great heavy artists and thankfully, 2009 (April 23-26 to be exact) appears to be more of the same. We already knew that Neurosis will curate 'Beyond The Pale' at Roadburn (it's an event within an event). Now word comes today that a reunited Saint Vitus (!!!) will headline one night at the Tilburg, Holland festival! Look for Saint Vitus to appear in it's Born Too Late (and one-off 2003) lineup, aka with the following members:

"We are extremely happy that were invited to Roadburn and we are excited to play. Those of you that saw us on the original reunion tour in 2003 are going to be extremely surprised at our set list. We are pulling stuff out of the hat that we haven't played in a long long time. So I suggest that you all get up front and prepare for your DOOM!"

In ADDITION, Roadburn have announced more of the jaw dropping line-up:

Let see... Wino. Scott Kelly. In the same place. Hmmm thats 1/2 of Shrinebuilder already... we just need Al Cisneros and Dale Crover. For more on that project: Al Cisneros discussed the Shrinebuilder project (and Om and everything in between) in an interview conducted at ATP.