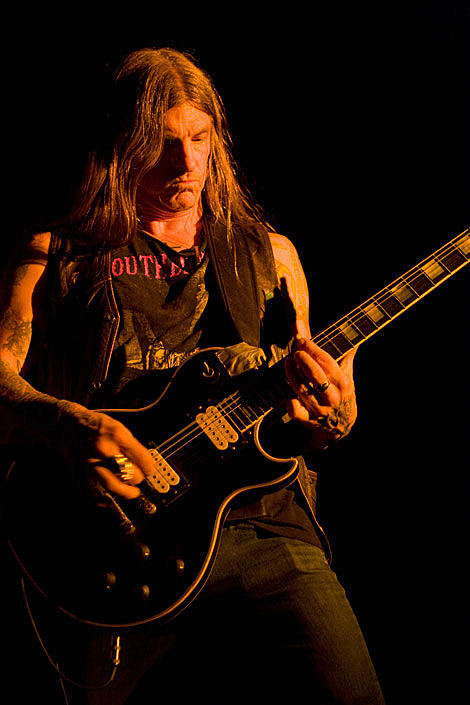 Helmet, Saint Vitus, and Crowbar. The three names alone are some of the most important in heavy music in the past two decades. And now BrooklynVegan is proud to co-present ALL THREE on ONE TOUR! That's correct, Helmet, who will be performing all of their 1992 classic Meantime, will team up with St Vitus & Crowbar to play a string of dates that will kick off on March 17th and conclude on April 5th. The trek, called the Metalliance tour, will also showcase some of my favorite names in underground music as opening acts. It's going to be a hell of a tour.

Look for some tour dates in the very near future! (including one in NYC? And maybe during SxSW?) More to come.

Helmet recently played NYC during CMJ with the great Intronaut and Fight Amp (who is playing Santos on 1/26 with Kylesa, tickets). Saint Vitus last played NYC at Europa with Saviours. And Crowbar destroyed NYC just in time for the holidays.

Wino (of St Vitus) will be in NYC in the very near future, and with his Shrinebuilder bandmate Scott Kelly. The pair will play Mercury Lounge on 2/10 (tickets) as part of a stint of tour dates for the pair.

Full press release, and some classic video is below...

In association with Revolver, Loudtrax.com, Brooklyn Vegan, Mosh Potatoes Cookbook and Giddy Up! Sauces is proud to announce HELMET, SAINT VITUS and CROWBAR for its inaugural line up. The festival tour will run through the U.S. from March 17th through April 5th.
Legendary alternative metal band HELMET will perform their 1992 platinum-selling release of Meantime in its entirety. The
Interscope Records release gave the band mainstream attention with songs like "Unsung" and "In The Meantime". With the
band's renewed success after getting back together in 2004, this tour will be one of the most anticipated of 2011.
One of the most highly influential Doom Metal bands in America, SAINT VITUS are regarded as one of the first bands of
the genre starting out as early as the 1970's. The band featuring Scott "Wino" Weinrich, bassist Mark Adams, guitarist
Dave Chandler and drummer Armando Acosta have influenced so many bands in Doom and Metal . "Saint Vitus is more
than ready to infect The Metalliance Tour! We've been wanting to do something like this for some time now...so prepare for
destruction!!" says lead guitarist Dave Chandler.The band has done a handful of shows and some European Festivals but
this will be their first full US tour in over a decade.
CROWBAR front man Kirk Windstein concludes, "Wow! This tour is gonna rule! I've loved Helmet since the beginning and
loved St. Vitus even longer. With the new Crowbar record having hit the streets by then, look out! This bill will bring just what
we need to crush each city with an avalanche of stylistic thunder!"