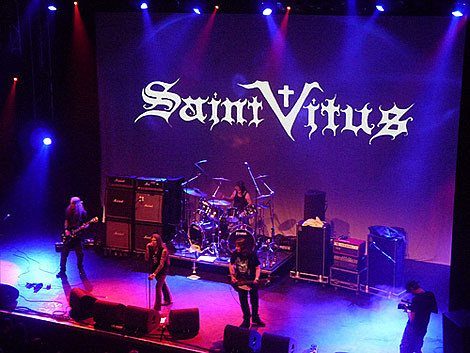 Hey doom fans! Are you sitting down? The legendary Saint Vitus has announced three east coast dates, including Europa in Brooklyn on Oct 16th. According to Blabbermouth, "these dates will mark frontman Scott "Wino" Weinrich's (THE OBSSESSED, WINO, SPIRIT CARAVAN, PLACE OF SKULLS, THE HIDDEN HAND, PROBOT) first appearances in these cities with SAINT VITUS since 1987!" Tickets for the NYC show are on sale (though there seems to be a problem with Ticketweb at the moment). Support is still TBA, though Type O Negative and the "Misfits" (who are playing BB King's on Halloween) are opening the October 17th show in Worcester (weird lineup). We'll keep you posted when more details surface.

Wino will also be in NYC with his solo band less than one week before the NYC date, supporting Clutch. Tickets are still available for both dates at Irving Plaza, 10/9 here and 10/10 here.