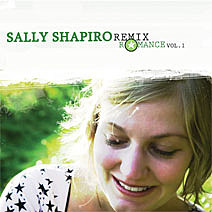 Paper Bag Records is pleased to announce the release of Remix Romance, a remix album adapted from Sally Shapiro's 2007 stellar debut Disco Romance, will be released on April 15th. Dancing on the excitement of her recent nomination for Female Artist of the Year and Dance Album of the Year at the 2008 Plug Awards in New York City, Sally will hit North American shores once again with this very special collection of remixes by an eclectic group of International artists.
Hand-picked by Paper Bag Records and Johan Agebjörn (Sally's producer), the artists featured on this record were already serious fans of Disco Romance - and all jumped at the chance to be involved in the project. The idea for a remix record was inspired by Skatebård's recent remix of 'He Keeps Me Alive' - as well as other artists, including Lindstrøm, Holy Fuck, and DFA's Juan MacLean. Junior Boys were especially interested, producing a characteristically sexy remix of the pop ballad 'Jackie Jackie.' Canadian newcomers Woodhands and The Cansecos both integrated live instrumentals into their remixes, resulting in effervescent new interpretations of Sally's original music.

Sally admits that it was difficult to decide on a track-list because there were so many great remixes to choose from, but she and Johan are both thrilled with the end result. "It's fantastic that so many people wanted to remix our songs!" she said from her hometown in Sweden. "There are even some remixes which I think are better than the originals."