Salome at BV-BBG at CMJ (more by Samantha Marble) 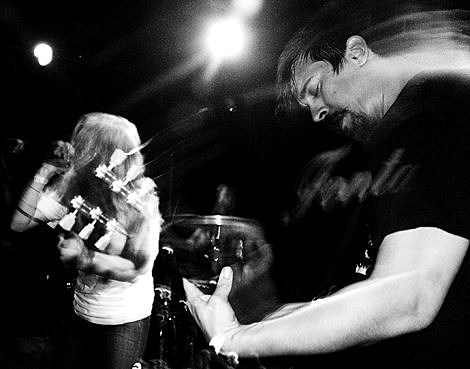 Wow just turned into OMFG. Wolves In The Throne Room and Salome have been announced as support for the previously discussed 3/11 Shrinebuilder show at NYU. Ticket Info is forthcoming, but NYU students can expect to pay $2 and non-NYU-ers pay a whopping $5.

And while we are on the topic of killer bands, we'd like to announce that Salome will play the two-stage BrooklynVegan Day Party on March 17th at Emo's in Austin, Texas! For those counting at home, that's Salome plus Torche and Fucked Up! More artist announcements are on the way.

That same night (3/19) at Spiro's, just down the street from the 20 Buck Spin/Profound Lore Showcase will be the WFMU/Aquarius showcase which, much like last year, is brimming with great and forward thinking music of heavy/punk persuasion. Liturgy will also be featured at the two-stage show along with Speedwolf, Iron Man, Moon Duo, Shit and Shine, Pierced Arrows, Dengue Fever, Epileptinomicon, Drunkdriver, Home Blitz, Headdress, Sonny & the Sunsets, True Widow, and Todd. For more on the upcoming WFMU show, head to their site. Decisions!

Drunkdriver's other upcoming shows include other SXSW gigs and Cake Shop in NYC on 3/14 with Todd.