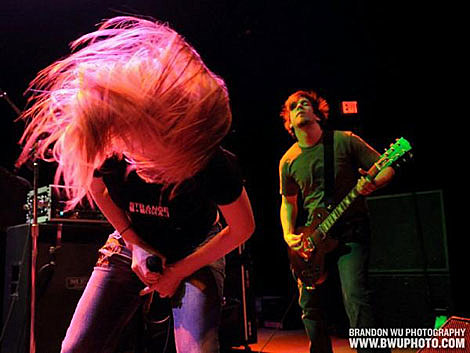 Zoroaster, A Storm of Light and Amenra's show at Europa isn't the only massive heavy bill going on in Brooklyn on Sunday (2/15). That second set of rumbling that you hear could be seismic aftershocks, but most likely it's Show No Mercy's Ocean, Salome, Riff Cannon & Batillus riff-stravaganza at Public Assembly. Hmmm. Decisions. Tix are available at the door, or for one lucky individual, for FREE. Email us at BVCONTESTS@HOTMAIL.COM with a subject line of "SALOME" for your chance to win a pair. The winner will be selected at random and contacted.

Salome have dropped off a NEW MP3 for us to salivate over as well.... Check out "The Vivification of Ker" downloadable above! For those counting at home, that is 3/4 of their ENTIRE self-titled LP, so get out there and pick up the record (it's worth it) and look for that new Agorophobic Nosebleed (Kat Salome's other band), when it drops on April 14th via Relapse! Full Salome dates are below.

Zoroaster, Mastodon, A Storm of Light, Salome, Nachtmystium, and a shit-ton of ridicul-awesome bands will converge (pun intended) in Atlanta on Feb 28th for Scion Rock Fest.