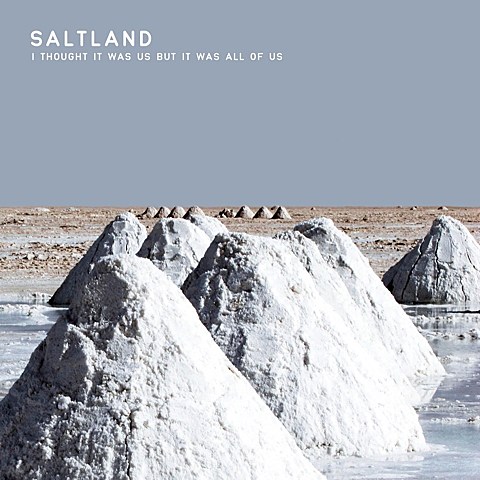 Saltland is the new project of Rebecca Foon, who co-founded Esmerine, and was also in other Godspeed You! Black Emperor-related groups, Thee Silver Mt. Zion and Set Fire to Flames. Saltland's debut album, I Thought It Was Us But It Was All Of Us, came out earlier this year via Constellation Records, the same label that puts out releases from GY!BE and their related bands. Rebecca's roots show on this album; you could imagine hearing many of her drifting cello lines on a Godspeed record and the songs have the wide scope of post-rock, but she also whisper-sings in a way usually associated with dream pop or psychedelic folk.

The album also features appearances from Little Scream's Laurel Sprengelmeyer, Jess Robertson (who also contributed to Little Scream) Mishka Stein (of Patrick Watson's band), Jamie Thompson (also of Esmerine), Sarah Neufeld and Richard Reed Parry (both of Arcade Fire), Colin Stetson (Bon Iver, Arcade Fire, etc), and others. You can download a track from the album above and watch the videos for two others, below.

In addition to the GY!BE-related projects, Rebecca was also in a side project with Spencer Krug (Wolf Parade, Sunset Rubdown, Moonface) called Fifths of Seven, so it makes sense that Saltland has been added as the opener to a few of the previously discussed Moonface solo piano shows. One of those is the NYC show happening on November 9 at Le Poisson Rouge. Tickets for that show are still available. Updated dates are listed below.

For Moonface, these shows are in support of his new solo piano album, Julia With Blue Jeans On, which is out today (10/29) via Jagjaguwar. It's his third Moonface full-length and continues the project's trend of different instrumentation on each album (first was organs/drum loops, second was a full rock band), but has the Spencer Krug songwriting style we all know and love. You can stream the album at Pitchfork.

Dates are listed, along with those videos, below...