Sam Amidon in a museum in the past 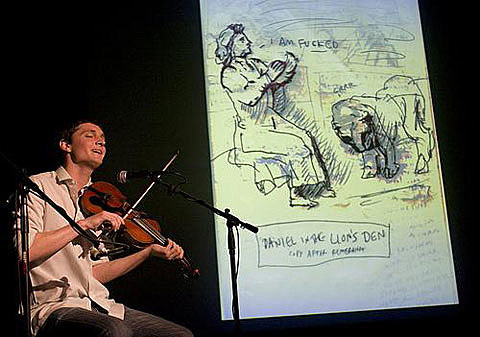 I made it to the Mercury Lounge just in time to catch the tail end of Partyface, the mysterious opener and Sam Amidon's self-proclaimed "favorite band." The only Partyface easily search-able on Myspace appears to be a death metal band from Massachusetts, but don't let that, or the wild energy invoked by the artist's chosen name, fool you. With just a guy on drums (Shazad Ismaily) and a girl on guitar, the Partyface present at last Wednesday night's show definitely falls more under the classification of singer-songwriter.

It's also tempting to call Sam Amidon a singer-songwriter, but that label proves to be somewhat problematic for a few reasons. Most obviously, Amidon doesn't really write his own songs - at least not in the conventional sense. Amidon's catalog consists almost entirely of traditional folk songs and an odd assortment of cover songs. Despite the lack of 'original' material, however, Amdion re-imagines and rearranges the songs he chooses so that by the time he's done with them, each one is born anew.

Vivid, often tragic stories animate Amidon's songs. The Mercury Lounge show featured a trip through the mountains, a blood-stained shirt, a fair damsel waiting for her lover to return from battle, and a girl with rosy-red lips. But Sam Amidon's songs are not the only things with a strong narrative appeal. His banter consists almost entirely of strange, outlandish stories that for the most part seem wholly unconnected to his music. (For example, he talks about an article in the Economist that he was reading on the train from London to Paris, which allegedly concerned a 'vegetarian homicidal robot' that forages for fruit and veggies and then burns them when it finds them.) Then, without missing a beat, he launches into his next song, making me wonder how he could possibly have trouble writing songs from scratch. Like a curious little kid, he seems to find stories in everything. Even his instruments have a story or two to tell. During one song, he preceded every banjo solo with the lightening fast quip, "What do you say, banjo?"

It isn't often that a band's percussion contributes much to a song in a thematic sense, but Shahzad Ismaily, Amidon's partner on stage, is capable of working magic. If he falls into the background at all, it is only because his percussive style compliments Amidon's music so well. Near the end of "I See the Sign," for instance, Amidon sang about dark clouds and Ismaily created a low rumble on the drums that sounded just like thunder rolling in from the distance.

Folk ballads and cover songs aside, Amidon also sets himself apart from the flock of other acoustic singer-songwriters due to his erratic and unpredictable delivery. One moment, he's singing about a wayward son straight out of the Old Testament, and another he's doing a mad interpretive dance (or a 'liturgical dance' in his words). First, he's like a medieval troubadour, delivering romantic lyrics with his warm, well-weathered voice. Then, he announces mid-song that we're going to take a 'journey' together, and he launches into a madcap freestyle that bore an uncanny resemblance to a train in desperate need of repair.

Amidon concluded his short but compelling set, sans encore, with a mini-medley of "Climbing High Mountains" and a cover of the charmingly naive and unrealistically optimistic R. Kelly song "Relief," which posits (among other things) that the war is over. Not many people could pull off covers by artists as far-ranging as R. Kelly, Katrina and the Waves, and Tears for Fears, but Sam Amidon seems to transform the songs and make them fully his own.

Sam will next tell stories on July 7th at Tony Shafrazi Gallery in NYC. More details on that free show along with the Mercury Lounge setlist and two of his story videos, below....

Sam Amidon will present a program of fiddle tunes, liturgical dance, banjo, and story videos at the Tony Shafrazi gallery, amidst the past and recent works of Bill Beckley (). Amidon has released 3 albums of modified traditional folk songs to great acclaim, collaborating with musicians such as composer Nico Muhly and Icelandic producer Valgeir Sigurdsson. The New York Times recently said of his recent album, "I See The Sign is a seriously intelligent record... It's theoretical and handsome music, and it makes good sense of its curious points of view." And Pitchfork writes "Amidon has one of the most inviting voices around today...In bridging the very old and the very new on a handful of albums and collaborations, he has managed to meld the rural and the urban, the organic and the synthetic, the oral tradition and the written score."

At the Tony Shafrazi gallery, Amidon will explore the more unlikely intersections of ancient folk music practice and the farther reaches of his mind and his banjo.