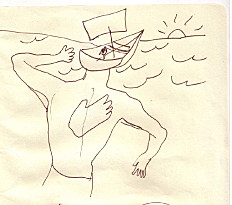 On Friday and Saturday night, singer Sam Amidon has hosted a series of sold-out shows at The Kitchen, an arts space in Manhattan that boasts an impressive Board of Directors that includes the likes of Philip Glass, Nico Muhly and Bryce Dessner to name a few.

With its austere, DIY theatre vibe, the setting was a bit unconventional, but then again, so was the performance. Much more than simply an evening of folk songs, ballads, and hymns, Amidon projected random video clips and odd, hand-drawn cartoons onto the large screen lining the back wall.

There were two clusters of instruments and laptops on stage - one for Amidon and the other for one of his regular collaborators, Shahzad Ismaily. Due to Amidon's mesmerizing presence, it's easy to overlook Ismaily on percussion, but only because his contribution is effortlessly subtle and effective.

Amidon began his multimedia show with a series of video clips, including one of himself in a rowboat, narrating the tragic tale of "a young child of indiscriminate gender, wearing a green raincoat who ran away from home at the age of 10." With such a vivid and candid performer like Amidon, it's often hard to tell if it's all an act or if he's a bit crazy, but that's part of the appeal.

As was quickly evidenced by both his home videos and his live performance, Amidon can hardly contain his odd stories and asides. With Amidon, it's about the journey - however winding or disjointed it may be. And with a fair amount of sing-a-longs thrown in to keep the audience engaged, it's hard not to feel that we're all weary travelers on the same odyssey.

Of course, the bulk of Amidon's show comprised songs from his last two albums, but he also played a quick succession of short folk songs. And yes, besides the more conventional aspects of the performance, he displayed everything from 'liturgical dancing' and chaotic vocal exercises to a book review (Peter Biskind's "Easy Riders, Raging Bulls: How the Sex-Drugs-and-Rock 'N' Roll Generation Saved Hollywood" - apparently terrible), a conversation between a piece of broccoli and a jar of maple syrup (naturally, about love and depression), and an R. Kelly cover ("Relief").

It may not have been the most coherent experience, but Sam Amidon's grab bag performances never cease to entertain and enliven.

Both Sam Amidon and Shahzad Ismaily also play in Thomas Bartlett's Doveman, so maybe they'll be there in March when Doveman goes on a very short tour with Nadia Sirota in March. That very short tour includes two shows in Minneapolis and that one taking place at Merkin Concert Hall on March 9th with Owen Pallett.

Nadia Sirota and Sam Amidon, along with The National's Bryce Dessner and Bishi, will also participate in Tell The Way at St. Ann's Warehouse on February 10th, 11th and 12th...

Tell The Way is a newly commissioned collaborative work created for the Brooklyn Youth Chorus (Dianne Berkun, Artistic Director) by the ubiquitous Nico Muhly. Loosely based on medieval and colonial English travel narratives, the work draws from American folk sources, prayers for the Royal Navy, early colonial diaries, Mandeville, Herodotus and Marco Polo. Nico Muhly's music is propulsive travel-music, but at the heart of Tell The Way are three meditative collaborations between Muhly and Bishi, Muhly and Bryce Dessner and Muhly and Sam Amidon. An ensemble of strings, percussion, piano, and flute augment the voices of the Brooklyn Youth Chorus, Bryce's guitar, Sam's banjo and fiddle, and Bishi's sitar.

Tickets for all three shows are on sale.

All tour dates and Sam's Kitchen setlist, below...