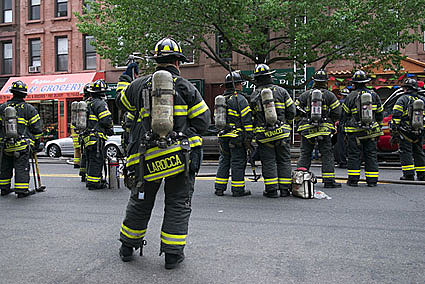 You may have heard about the fire at Pizza Plus on 7th Avenue in Park Slope (Brooklyn, NY) the other day. Those living above the pizza place have been displaced, and two of those currently-homeless people just so happen to be members of the NYC band Sam Champion (who may or may not have started the fire to gain publicity for their new album - JUST KIDDING!). I contacted their singer (and man about town) Noah Chernin, and this is what he had to say:

I live there with two other roommates, ryan, who plays drums in our band and luke schurman, an actor/musician. our bathroom and back of the apartment including luke's room are completely destroyed. ryan's room and my room were pretty much untouched, except my windows were smashed out and some smoke damage.

it's still a crime scene, i think. we are slowly going back and getting our things. no instruments or gear really got damage. luke lost a bunch of writing and journals that obviously have a lot of sentimental value and can't be replaced.

we are couch surfing and living with girlfriends right now and don't think we'll be back there (if we go back) for another few months.

at this point we don't really know what our next move is...
except to ROCK HOUSE on tuesday at bowery.

Want to see them rock house (with TigerCity, Stylofone, the Affair, and DJ Justin Carter)? Noah is giving away TW0 PAIRS OF TICKETS to BV readers. Want them? E-mail BVCONTESTS@HOTMAIL.COM (Subject: SAM). Include your first and last name as you would like it to appear on the guestlist. Contest ends at 1pm on Tuesday (TODAY) May 15, 2007. Two winners will be picked at random and contacted.