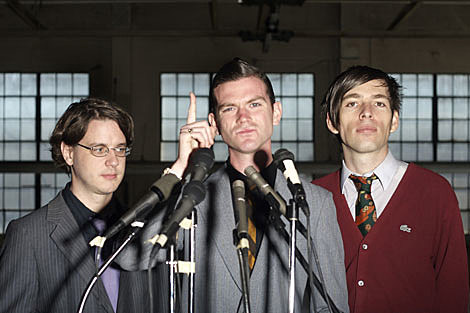 Seattle's The Dead Science (not to be confused with The Dead Weather) are planning a North American tour this June. That includes two NYC shows: Monday, June 15th the band plays the Studio at Webster Hall with Bobby Conn & Monica Bou Bou and Zs (Tickets). The next night, Tuesday, June 16th, the band performs at Death By Audio with Skeletons, From Bacteria to Boys and Charlie Looker.

The Dead Science's last record, Villainaire, came out on Constellation Records in 2008. The supporting tour for that release brought the Dead Science to NYC's Knitting Factory on a bill with Brooklyn band Extra Life. This time around, the band will play with Extra Life's songwriter/frontman, Charlie Looker, on its second NYC show, and Zs, a band that included Looker for six years, on its first.

Extra Life are currently on a month-long tour of Europe. The DBA show is scheduled to be Looker/Extra Life's first show back in the US.

Also opening at DBA is From Bacteria to Boys, jazz project of drummer Mike Pride. On April 8th, the group played a live set, now streaming, at WFMU's studios.

Pride plays in a number of local groups (that counts collaborating with Charlie Looker on a project called Period). Recently, Pride gigged as part of Whoopie Pie at Pie member Jamie Saft's Wednesday residency at Zebulon. On Wednesday, May 6th, Whoopie Pie's special guest was Marc Ribot (who's in the midst of a weeklong b-day retrospective). Tonight, Wednesday, May 13th, at Zebulon, the group will be joined by Dead Science frontman Sam Mickens as "special guest vocalist."

Mickens returns to Zebulon just two days later, on Friday, May 15th, to record and film a live album with the "Sam Mickens Ecstatic Showband and Revue." That band includes Mike Pride on drums and in the past has featured Charlie Looker and other members of Extra Life.

The final band on that June 16th DBA bill, Skeletons, has other upcoming NYC dates too. Those include May 19th at the Cake Shop with Nick Krgovich, To Bad Catholics and Katie Eastburn and June 24th with Zs at the Studio at Webster Hall.

All Dead Science and Skeletons tour dates below...