The Sea & Cake at Summerstage 2010 (more by Matthew Eisman) 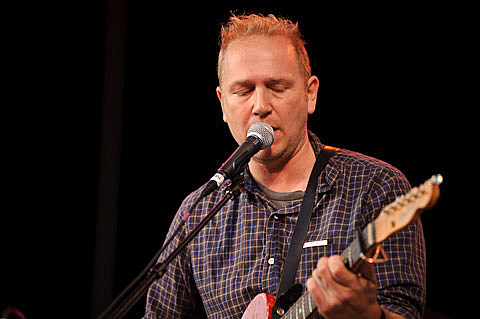 It's not a full Sea & Cake show, but main men Sam Prekop and Archer Prewitt are playing together at Mercury Lounge on June 30 (tickets on sale Friday at noon). It's an early show (doors 7:30) and their only live date apart from a Sea & Cake show in the band's Chicago hometown on May 8. The Sea & Cake's most recent album was last year's The Moonlight Butterfly.

In related news, Sam Prekop guests on Laetitia Sadier's new solo album Silencio, which is out July 24 on Drag City. Also on the album is her former Stereolab cohort Tim Gane and former Zincs man James Elkington. No preview tracks or even cover art yet, but we do have a tracklisting for the album which you'll find below, along with those two Sea & Cake dates.

Silencio tracklisting:
01. The Rule of the Game
02. Find Me the Pulse of the Universe
03. Silent Spot
04. Auscultation to the Nation
05. There is a Price to Pay for Freedom (and it isn't Security)
06. Moi Sans Zach
07. Between Earth and Heaven
08. Lightning Thunderbolt
09. Fragment pour le Future de L'homme
10. Merci de M'avoir Donné la Vie
11. Next Time You See Me
12. Invitation au Silence