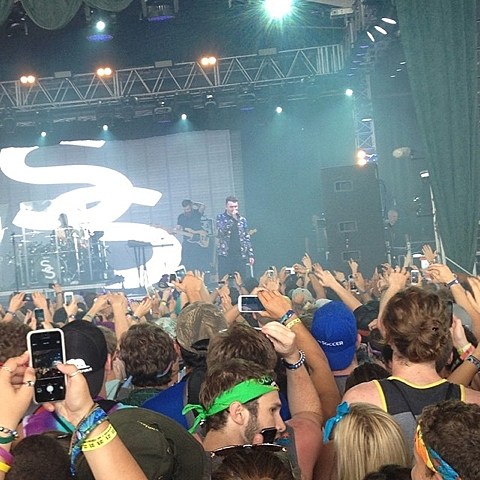 While soccer fans watched the World Cup play out on a jumbotron at the Kalliope stage, [Sam Smith] attracted Bonnaroo's youngest, hippest, style-conscious attendees at The Other Tent.

Smith's debut album, "In the Lonely Hour," entered the U.K. charts at No. 1 last month, and it looks to make a big splash when it hits U.S. stores on Tuesday. Like few other acts on this year's bill, he's very much a star of the moment. A suave, British soul singer, laying smooth falsetto melodies over '80s-tinged funk and R&B - just a few short years ago, it would have been considered the opposite of hip. The tide has obviously turned. [The Tennessean]

Bonnaroo went down over the weekend and among other things featured one of the biggest US crowds British pop singer Sam Smith had yet to play to. The Disclosure collaborator played the stripped version of their collaboration "Latch" (which appears in that form on his new album), his own hits ("Stay With Me," "Leave Your Lover"), and covered the Arctic Monkeys' "Do I Wanna Know?," a song that band opened their set at the same festival with two days later. (MS MR also covered it during their Bonnaroo set.) Sam also joined Disclosure during their 'Roo set just hours later and performed "Latch" once again. You can watch a video of Sam's Arctic Monkeys cover, with his setlist from the festival, below.

Sam's tour hits NYC for a sold-out show at The Apollo tonight (6/17) and returns to NYC in September for shows at United Palace (tickets) and Hammerstein (sold out).

Sam will be sticking around NYC this week, doing a record signing at Rough Trade on Thursday (6/19). You just need to buy his record that day to get a wristband for the 6 PM event.

Another Disclosure collaborator Jessie Ware announced that her new album would be out at some point this year via PMR/Friends Keep Secrets/Interscope and told Pitchfork it features collaborations with Miguel, Ed Sheeran, Julio Bashmore, Dave Okumu, Kid Harpoon, James Ford and Nineteen85. Its first single "Tough Love" is out now, and it's a more laid back single as far as Jessie Ware songs go with an almost James Blake-like quality to the chorus. This one was produced by BenZel, aka Two Inch Punch (who produced Sam Smith's "Money On My Mind") and Benny Blanco (who's written/produced huge songs like Katy Perry's "Teenage Dream" and Maroon 5's "Moves Like Jagger").

Listen to that, with the Sam Smith stuff, below...