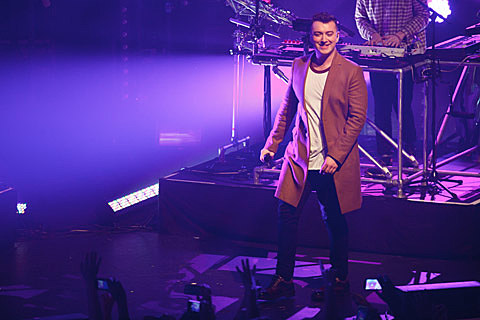 Rising UK pop singer and Disclosure collaborator Sam Smith will return to the US this June for Bonnaroo and while he's here, he'll squeeze in a headlining show at NYC's historic Apollo Theater on June 17. Tickets for that show go on sale Wednesday (5/21) at 10 AM. All dates are listed below.

Meanwhile, we're only a few weeks away from Sam's debut album, In the Lonely Hour (due out 6/17 via Capitol) and the young singer has been having some nerves about it. He told Vodaphone (via Digital Spy):

"If I'm honest, I'm completely cacking myself," he laughed. "It's scary! I've just been in London for the past few days and seen some of the posters up on the Tube and stuff.

"It's all real now. I've been envisaging this moment for a long time, so it's scary but it's also very exciting."

His fame is kinda happening all at once. His single "Stay With Me" is the third most-Shazamed song in the US this year (only behind Ed Sheeran and Ariana Grande) and it's also rocketing up the Top 40 airplay chart.

Sam just performed the song on The Graham Norton Show this past Friday (5/16). You can watch a video of that, with the list of tour dates, below...

Sam Smith - "Stay With Me" on 'Graham Norton'