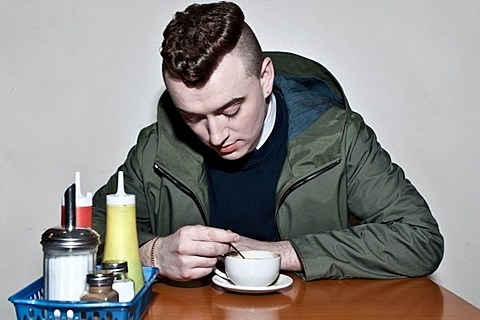 Congratulations on being the Sound of 2014! How does it feel?

It feels incredible. I'm so involved in the charts, I love pop music and I love female pop artists. With this award, Florence and the Machine, Ellie Goulding and Adele have all been on it, which is incredible. Even to be a part of it is amazing.

What was the first song you learned the words to?

There's a diva quality to your voice - is that sort of music the inspiration?

It's all I listened to. I actually didn't listen to male vocalists until about two years ago. I just listened to Whitney Houston, Chaka Khan. Massive voices. [BBC]

Congratulations to Sam Smith for topping the BBC's Sound of 2014 list! The 2-5 spots went to Ella Eyre, Banks, Sampha, and George Ezra, respectively, and Sam also beat out Chance the Rapper, FKA twigs, Chloe Howl and others. Sam first gained widespread attention when he contributed his vocals to Disclosure's "Latch" and he's since begun releasing some impressive solo material which will culminate in his debut album, In the Lonely Hour, due out on May 26 via Capitol Records.

As discussed, Sam is going on a North American tour soon which hits NYC on March 24 at Webster Hall. Tickets for that show are on sale now. All dates are listed below.

In related news, another group of Disclosure collaborators, London Grammar, will be in NYC much sooner for two sold-out shows next week at Baby's All Right (1/15) and The Box (1/16). They've also since announced that they'll perform on Late Night with Jimmy Fallon on January 13.

All Sam Smith dates are listed, along with some streams, below...