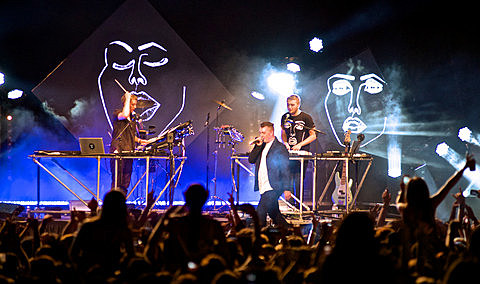 Sam Smith has had a pretty steady rise, first catching ears towards the end of 2012 with his guest lead vocals on the Disclosure single "Latch," and then focusing on a solo career that included an EP and had him in NYC for a sold-out Mercury Lounge show in August. He was then longlisted for the BBC 'Sound of 2014', showed no signs of slowing down musically with his excellent new "Money On My Mind" single, and just won the Brits 2014 Critics' Choice award which has gone to Adele and Florence & the Machine in previous years.

He's also got some dates announced for 2014, including only one North American show at the moment, which happens at the significantly larger (than Mercury Lounge) Webster Hall on March 24. Tickets for that show go on sale Wednesday, 12/18 at noon. All currently known dates are listed below.

UPDATE: Sam announced a full North American tour, and all dates are listed below. He also announced that his debut album, In the Lonely Hour, will be out on May 26 via Capitol Records.

Disclosure has a lot going on too. Earlier today, we posted about their new video, remix LP, and NYC DJ dates happening during their sold-out Terminal 5 run.

All Sam Smith dates are listed, along with a stream of his recent single, below...