San Fermin at LPR in September (more by Amanda Hatfield) 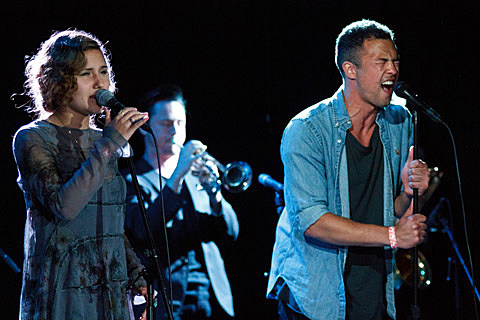 Brooklyn chamber pop collective San Fermin (the project of Nico Muhly associate Ellis Ludwig-Leone) recently celebrated their self titled debut LP (out now via Downtown) with a release show at LPR, and they've now announced a full tour in support of the record. The new tour doesn't include any NYC dates, but the band will play a hometown gig later in the year on December 12 at Music Hall of Williamsburg. Tickets for that show are on sale now. All dates are listed below.

On San Fermin's album, vocal harmonies are handled by Jess Wolfe and Holly Laessig of Brooklyn's Lucius (who have also collaborated with Wilco). Lucius also announced a tour that includes a hometown show happening on December 7 at Bowery Ballroom with Kingsley Flood. Tickets for that show are on sale now. They also play a free WFUV-presented CMJ show at Rockwood Music Hall on 10/15 with Saint Rich, James Bay and Claire.

All dates for both tours are listed below...