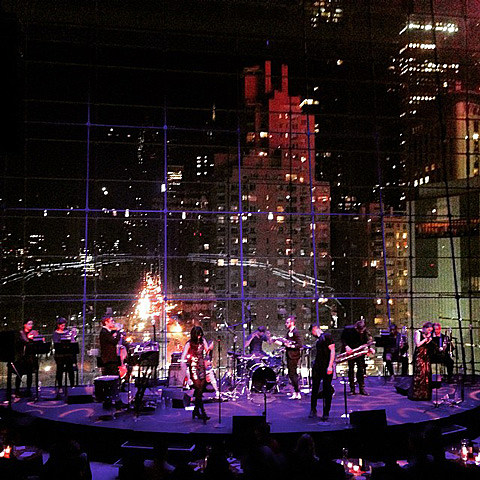 The presence of open incandescent light bulbs on stage at the Appel Room (formerly Allen Room) enhanced the already gorgeous atmosphere of the Lincoln Center venue that overlooks Columbus Circle and Central Park South with its ebb and flow of headlights. At the same time, the atmospheric "baroque pop" of San Fermin (with a total of eight members) was enhanced by the presence of the six-piece Metropolis Ensemble (three brass/horns and three strings). San Fermin were showcasing songs from their forthcoming, second album Jackrabbit out in April on Downtown Records. Primary song-writer Ellis Ludwig-Leone was off on the side at his keyboards, remaining low-key, as his bandmates were the center of a vibrant, almost hour and a half, performance. - [PopMatters]

Baroque pop group San Fermin just played Lincoln Center's American Songbook Series where they performed against a backdrop of the Manhattan skyline with help from the six-piece Metropolis Ensemble. The show featured a few songs from San Fermin's new album, Jackrabbit, which is out in April via Downtown Records. You can stream Jackrabbit's title track below. Did you go to the show?

San Fermin will be touring this spring, including two NYC shows at Music Hall of Williamsburg on April 23 & 24. The 4/23 is also with Metropolis Ensemble plus openers White Hinterland; the 4/24 show is a straightforward San Fermin show (no ensemble backing) with Son Little opening. Tickets go on sale Friday (2/20) at noon but you can get tickets early via a BrooklynVegan presale starting Wednesday (2/18) at noon. Check back Wednesday morning for the presale password.

Much of San Fermin's tour will be with Natalie Prass. All tour dates are listed below...