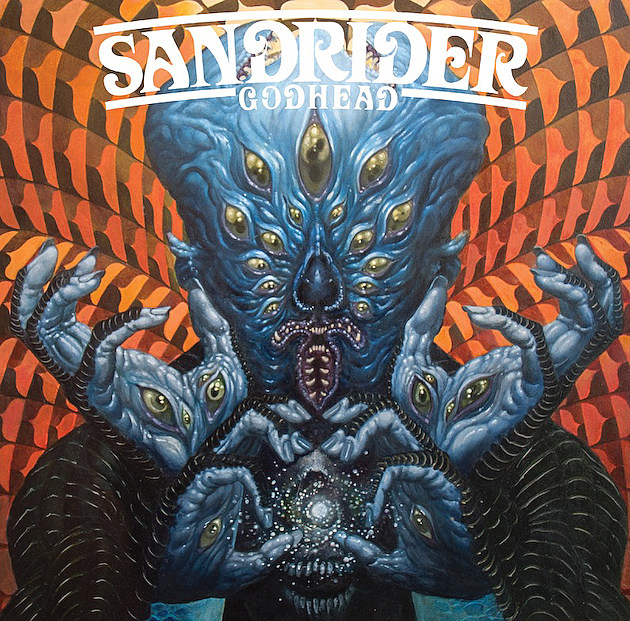 Last week we debuted a song by Sandrider called "Gorgon" from the band's forthcoming (11/19) album Godhead over on Invisible Oranges. We liked it so much we thought we'd share it here, but first, here's what we had to say about it:

A day after Link Wray and Nirvana were nominated for the Rock and Roll Hall of Fame, it's only fitting that we premiere a riffed-out song from a Seattle band. Here's Sandrider's "Gorgon," the first debuted track off of their forthcoming album album Godhead. As I've been listening to Godhead over the past few days, the noise/southern sludge has taken hold. Some of the tracks on the album crunch along at mid-tempo; others have lofty ambitions and culminate in epic crescendos. "Gorgon" is here to party.

Sandrider takes their name from the Frank Herbert novel Dune, and Godhead is the three-piece's second album. Fans of bands like Red Fang and Black Tusk (sticking to bands with colors in their names here) will dig Sandrider.

I failed to mention in that writeup that two of the members of Sandrider used to play in the now defunct Seattle sludgy hardcore band Akimbo. You can listen to Akimbo's posthumous final release, Live to Crush, below.

I did say that fans of Red Fang would find something to like in Sandrider. As previously mentioned, Red Fang recently hit the road with The Shrine on a tour that lands in NYC at Bowery Ballroom on 12/10 with Cancer Bats and Indian Handcrafts (tickets). On that tour, Red Fang will also play a single show with Sandrider in Vancouver (without the regular tour support, but with Bison B.C.) at the Rickshaw Theater on 11/10. See below for the rest of Sandrider's dates, none of which, sadly, will be in NYC.

Stream Sandrider and Akimbo songs and check out tour dates below...