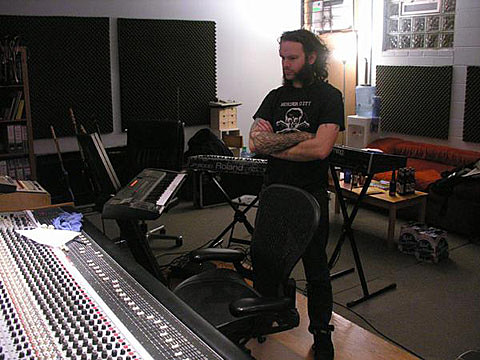 Sanford Parker is another contributor to the previously mentioned Bloody Panda remix LP, joining names like Matmos and Mick Barr (who recently posted his remix at Pitchfork) with his remix of "Pusher", which makes its debut here. Chicago-an Parker, go-to metal producer and member of many area bands, sat down with us to discuss his views on the remix, current studio projects and the current status of Minsk, Buried at Sea, Circle of Animals, The High Confessions, and Nachtmystium. The results, which include a discussion on his first frightening encounter with Bloody Panda and the new song stream, are below.

What about "Pusher" attracted you for a remix?
When I was asked to do this remix I wasn't familiar with this album. I tried to listen through it as fast as possible, I didn't want the original mix to influence me in any way. The song "Pusher" just sort of jumped out at me. It seemed to be one of the more straight forward tunes and I felt I could make it noisy and aggressive.

In general how do you approach a remix or a cover? Do you like to stay faithful to the source material, or veer off into your own uncharted realms?
Well when doing a remix there are no rules. I try and create a new song. Take what material I have and recreate something new. I try not to add anything as far as writing. My goal is to take what's there and recreate it. I found a couple segments in the guitar tracks and made new riffs by looping them. The same go for the drums. These are beats from the song that I looped and effected to create new beats. I had to edit the vocals so they would fit the new parts, that was the most complicated thing. Editing syllables and shit, each little word had to be moved to make it fit. There was this droning keyboard thing I really liked by itself so I made that the intro. The only thing I added was the crackling sound at the beginning. That was my car keys on a contact mic, I like that trick.
As far as a cover goes I try not to stray for far from the original. I mean what's the point of doing a cover if your just going to completely change it. The attraction to the original is why you choose to cover it in the first place. But a remix is totally different in my opinion. Anything goes. 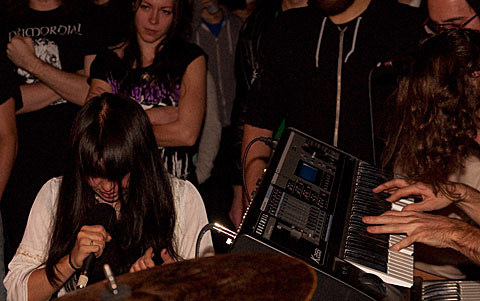 How did you become familiar with Bloody Panda
Minsk was on tour with Rwake back in 2007. I think we had played New York the night before and was on our way to Boston for a gig at a VFW. Of course the traffic was brutal so we were late as hell. We pull up to the venue and if recall it was raining super hard. We jumped out of the van, popped open the trailer and started slinging gear. A couple dudes grabbed some guitars and what not and bolted for the door. A few minutes later Tony (Minsk drummer) comes running out "Whoa dude you gotta fucking see this". So I dropped whatever gear I had and followed him inside. There were a group of kids standing in a circle and inside the circle was a band playing. They were dressed in black cloaks and hoods with these dark mask so you couldn't see their faces. The band was droning on this super low heavy note and standing out front was an Asian girl pacing back and forth screaming her lungs out. It was a very surreal environment to walk into after sitting in a van for hours stuck in traffic. I turned to the guy standing next to and asked half joking, "Is this some weird satanic mass of something?" And the guy turned to me with a very serious look on his face and says "No, it's Bloody Panda." 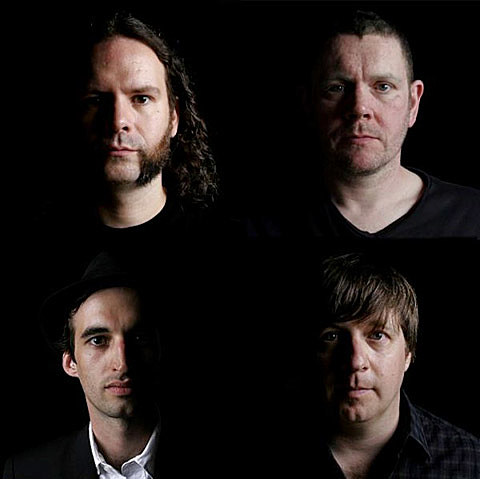 What are you currently working on in your studio and what is the current status of Circle of Animals & The High Confessions? Will these projects ever do live dates?
The High Confessions have a new record almost done. We just need to add a couple guitar tracks and mix it. I've also started writing and recording for a new Circle of Animals album. Got some pretty sick dudes lined up for the new one. Our goal is to start playing out at some point. Everyone's schedule with both bands is so insane it makes it hard to book anything but maybe one day we'll get it figured out.

What other projects to you currently have in the works?
Well aside from COA and THC, Nachtmystium are putting the final touches on a 3 song EP and plan on hitting the studio in December to start recording the new full length. Minsk is about 75% done on a new record. Also Buried at Sea are currently booking some European tour dates, I'll have more info and a fest announcement soon. Quite a lot going on right now.

Minsk at Public Assembly in 2009 (more by Justina Villanueva) 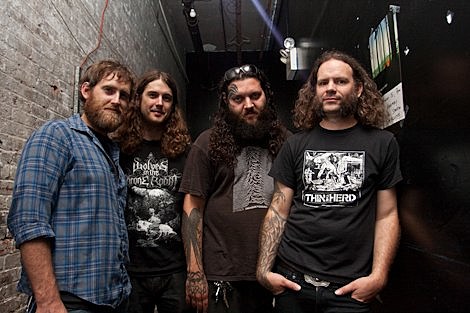 I thought Minsk had called it quits? Are you planning on doing any dates?
No far from being done. Were just not playing shows anytime soon. Chris has a new band called "Lark's Tongue" and Tim is singing for "We the Prey" both bands are killer.

What band, or bands, do you think exemplify the Chicago sound?
Chicago doesn't really have a sound it's more like a core. There are these musicians here that all work, create and live together that make up this core, and from this core spawn these bands and no 2 bands sound the same. To me that's what makes up the "Chicago Sound" and also makes it unique form any other city.