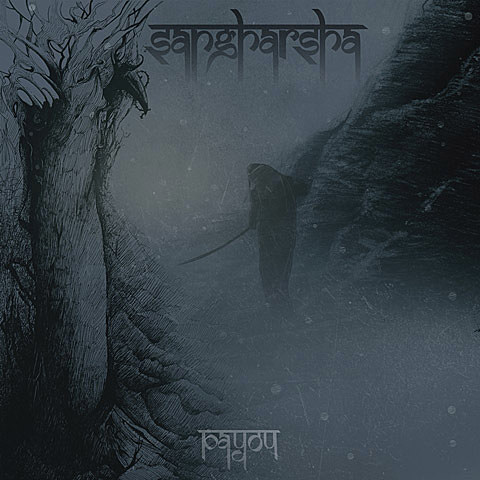 Massive. That's the easiest and most economical way to explain Sangharsha's new album, Bayou, available on LP July 15 through Alerta Antifascista Records. Sure, a lot of punk albums produced by Kurt Ballou have been tagged with that descriptor, but Sangharsha earn it with thudding metallic hardcore that's heavier than a pallet of Kiss it Goodbye vinyl. Even when they engage in melodic respites that recall Corrupted, they exude a towering massiveness. Overall, it's like Turmoil with a meaner streak and sludgier tone. Oh, yeah, and if Turmoil sang in Nepali.

Indeed, the four men comprising Sangharsha originally hail from Nepal, though the band was formed in New York City. Kshitiz Moktan was recently interviewed by Andrew Aversionline and shed some light on how he found his bandmates:

Basically, I came to the States to study, and I first landed in Alabama for my undergraduate degree; where I met Yogen (vocalist) in 2005. I never thought I would play or end up in a band, but time passed and he moved to NYC around 2007. After my graduation in 2008 (and staying in Virginia for almost a year until 2009), I was so frustrated without a job and shit like that, I just moved to NYC in 2010--where Yogen was already set up. I had a couple of jams that I had written during my last year in Alabama, and found Prasanna (bassist) through a friend, and a drummer who was playing guitars in a Nepali band here in NYC.

One thing I figured out was that due to the sheer number of Nepalese people here in NYC, it was easy to network and find like-minded musicians.

In addition to collecting tracks for the international compilation Ghalazat MMXIII, Sangharsha have also found their way onto a number of notable bills, including July 26 at the Acheron with Sadgiqacea and Hivelords, plus Insect Ark. They'll also play Saturday (7/12) at The Shillelagh Tavern in Queens as part of a fundraiser for Anarchist Black Cross, which features All Torn Up, [ Thirsty! ], Penguin, and Pre/Science. Tickets are $10 at the door. And Sangharsha will be supporting So Hideous -- who are playing with Mouth of the Architect on August 29 at the Acheron -- for their tour kick off at Clifton, NH's Clash Bar on July 18. Other bands include Gyre, Organ Dealer, and Through Thorn and Brier. Tickets are also $10 at the door.

All of the dates along with the stream for Bayou appear below.