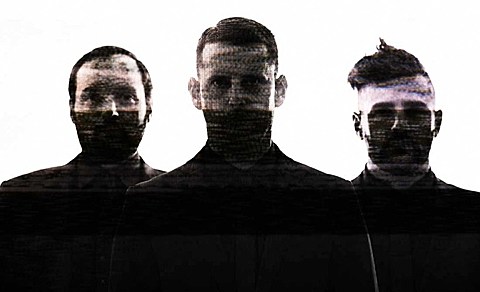 Sannhet have been one of Brooklyn's best post-metal bands for a while now, and next week they'll release their anticipated sophomore album (and first for The Flenser), Revisionist. We already posted the crushing single "Lost Crown" and the title track, and now they've made the whole album available to stream. It's soaring, epic music that stays captivating from start to finish, despite the lack of a vocalist. And sure their metal ties make this a heavy album, but it's nothing that wouldn't appeal to fans of Explosions in the Sky and Sigur Ros as much as it would appeal to fans of Neurosis. Take a listen below, via Pitchfork.

Pitchfork also interviewed them, and they talked -- among other things -- about the band's light show, which you know is a big part of their performance if you've seen them live. Says bassist AJ Annunziata:

It's meant to be as choreographed as possible--I trigger the flood lights and the strobe lights with my foot--but it does still have a little bit of openness and responsiveness to the set. John and Chris were apprehensive about the lights because, again, it was like defining a theme or idea to the songs, and they're very much about keeping that ambiguous and interpretative. So they made a rule for me when I was making the projections: They cannot be tied to any one realistic physical thing or idea. So I did a lot of animations akin to animation experiments from the early part of the 20th century.

You can see that light show in action when the band hit the road with Liturgy this spring. They also play their hometown sooner than that with the likeminded This Will Destroy You and their Flenser labelmates Planning for Burial. It's night 2 of TWDY's BrooklynVegan-presented two-night stand at Saint Vitus this week. Both sold out.