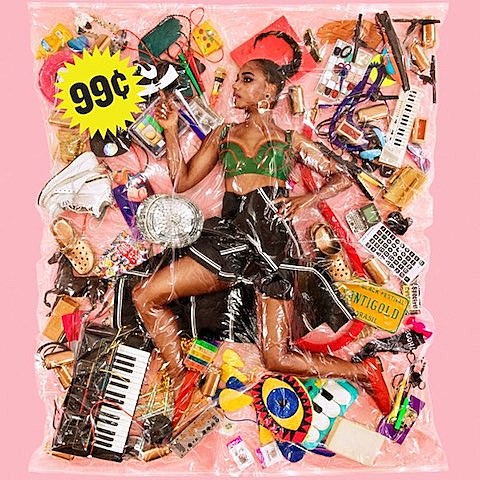 Santigold will soon be back with a new album titled 99¢, her first since 2012's Master of My Make-Believe. It's out January 22 via Atlantic. New single "Can't Get Enough Of Myself" premiered today on Zane Lowe's Beats 1 show. Produced by Patrik Berger (whose credits include Robyn's "Dancing on My Own" and Icona Pop "I Love It") it's a very likeable, reggae-tinged bit of upbeat dancepop and you can stream it, along with her Zane Lowe interview, below.

Of the album's title, Santi told Lowe, "Everything is a product these days, including people, relationships...it's all about marketing products. Also everything's undervalued, you know? I'm a product too. So 99¢ seemed like a good price for me and my life and all my hard work." You can watch a satirical ad for the album below. In addition to Berger, production work on LP was done by a variety of producers, including Vampire Weekend's Rostam Batmanglij, Hit-Boy, TV on the Radio's Dave Sitek, Justin Raisen, Sam Dew, John Hill, and Doc McKinney.

Santigold just played the rainy second (final) day of New Orleans' Voodoo Fest and you can check out pictures here. She'll be the special guest at Antibalas' show at Brooklyn Bowl on November 11, along with Superhuman Happiness. That's part of Antibalas' monthlong BB Wednesdays residency that began last week and continues tonight (11/4) with special guest Saul Williams and EMEFE. That wraps up November 18 with special guests Lee Fields & Will Holland (Quantic) and also Raja Kassis's HUMANBEING. Tickets to all three Antibalas Brooklyn Bowl residency shows are on sale now.