Santigold at MHOW in January (more by Bao Nguyen) 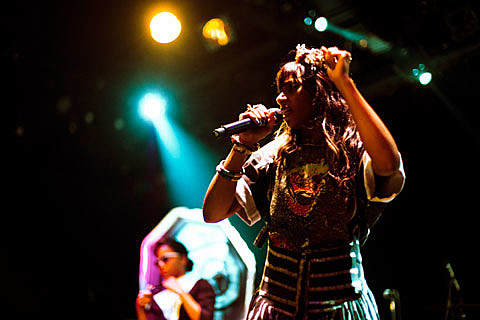 Santigold, who recently released her new album, Master of My Make-Believe, and is currently touring in support of it, is stopping in NYC TONIGHT (5/14) at Irving Plaza for a free Samsung Mobile USA-sponsored show. RSVP is closed but we're giving away a pair of tickets. Details on how to enter to win are below.

If you can't make it to the show, you'll be able to stream the entire thing live at the Samsung Mobile USA facebook. The show will feature special guest appearances from Pharrell Williams and SNL's Andy Samberg, who wrote the Lonely Island song "After Party" which Santigold sings on. Doors for tonight's show open at 7 and the show starts at 8.

In related news, Santigold is one of the many contributors to the new Amadou and Mariam album, Folila, which came out last month. She co-wrote and sings on the album's opening track, "Dougou Badia." You can stream that track below. Amadou and Mariam return to Central Park Summerstage this summer.

Song stream and contest details below...

For a chance at winning tickets to see Santigold at Irving Plaza TONIGHT: either tweet something that includes both @BrooklynVegan AND "SANTIGOLD" in the tweet, or send an email to BVCONTESTS@HOTMAIL.COM with the subject line "SANTIGOLD". Include your first and last name in the email. We'll pick a winner at random and contact them with more details. If you enter by email, it will not be shared with anyone else. Good luck!