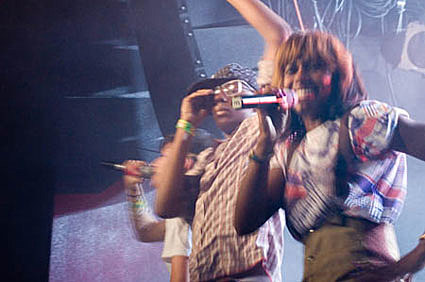 Santogold is not to be confused with M.I.A., but she is friends with her. She's also friends with Diplo, Switch, Sinden, Amanda Blank and of course Spank Rock. Spank Rock joined her on stage when she opened for Bjork at MSG last week, and then they played together again at the Klaxons afterparty at Rebel later that night. Santogold's next announced NYC show is October 20th at Highline Ballroom - part of CMJ (a Steve Aoki party).

Three days before Bjork - Spank Rock was billed as the DJ at an Apple Store in Manhattan (at midnight). Ends up it turned out to be much, much more.... 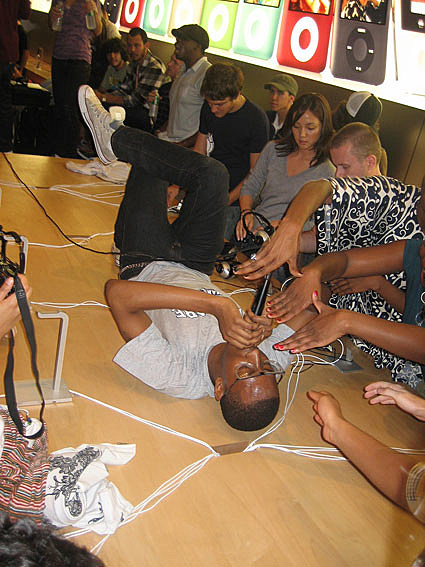 .........a female fan came up on the "stage" and spank rock began dancing with her. nothing extraordinary, just some good 'ol fan participation. this must have been the straw that broke the camel's back for one of the older apple staff. he barged his way through the 10 or so people behind the "stage" to get to spank rock (who was lying on the ground, as he often does during performances). the man grabbed spank rock's leg. when this didn't get the results he was hoping for, the man went after spank rock. the entourage (who were sitting on a shelf behind the "stage") quickly rushed to break it up. water was flying everywhere and a angry spank rock emerged from the pile without his trademark glasses, shirt torn and soaking wet. although obviously furious, spank rock's calm mannered appearance prevailed as he dove off the "stage" into the crowd as if to say 'thank you and goodnight.' after returning to the "stage" he hopped down off the table and walked toward the exit marking the abrupt ending......... [Life's Bathroom]

More pics, and info on new Spank Rock, below... 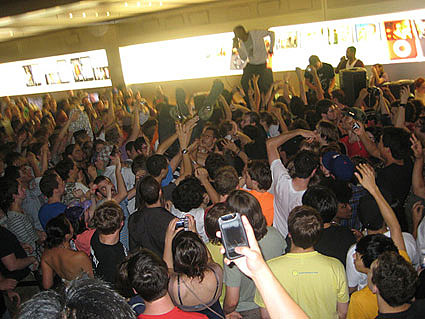 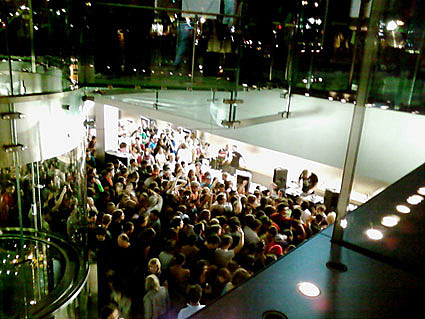 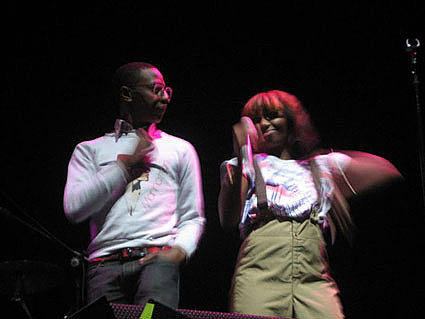 Great set, followed by something even more special at the "official" afterparty at Rebel: a full set of Santogold 'n' Spank Rock, doing the full Bangers & Cash EP we've been breathlessly going on about, as well as cuts of their own catalogues. Amanda Blank was there, too, making "B.O.O.T.A.Y." (featuring both ladies) and "Loose" (just Amanda). Quite the birthday celebration for Santi, kids going nuts, sweaty floor full of gropers and grinders, dancing 'til way past our bedtime. [Stereogum] 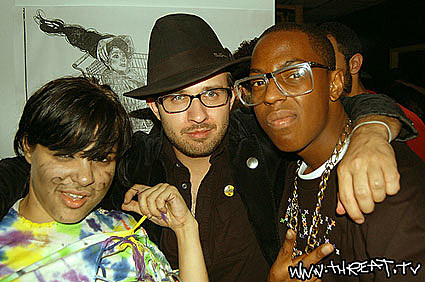 Spank Rock and Benny Blanco's new songs like "Bitch" are streaming at MySpace. Together they are Bangers & Cash. 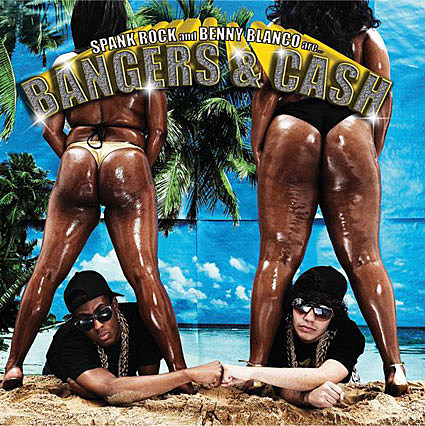 Spank Rock will be performing at the MTVu Woodie Awards @ Roseland Ballroom in NYC on November 8th.